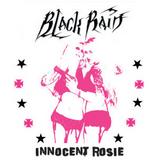 Production:
Produced by BlackRain and Johnny Rocket.
Mixed and mastered by Chris Laney.

Review:
BlackRain is a French rock band that plays a mix of rock, glam, sleaze and metal. The band was formed in 2002 by Swan (vocals and guitar) and Max 2 (guitar). They started out by playing cover tunes of their idols like Motley Crue and W.A.S.P. In the beginning the band had different people on bass and drums, but one of them, Iann Lewis (drums), chose to stay in the band. Later they found Heinrich (bass), who played a little guitar, but now plays bass for the band.

Innocent Rosie is a promo EP with three songs, all of which will be found on the band’s upcoming CD License To Thrill, which comes later in the year. The songs on this album are recorded and produced by BlackRain and Johnny Rocket and mixed/mastered by Zan Clan‘s Chris Laney (who also mixed the upcoming album).

The first song on the CD is “Innocent Rosie”, a cool sleazy song in the same style as CrashDïet and other recent Swedish bands. The next song is “Rock Your City”, which reminds me of bands such as Wig Wam and H.E.A.T. and it could easily be BlackRain‘s rock anthem. The last song is called “Nasty” and this is the most rocking song on the Innocent Rosie EP. Again, I’ll say that this song has the same style as the Swedish bands in the same genre of music. All three songs are really catchy and make you rock along, stomping your foot and tapping on your knee, when you hear them.