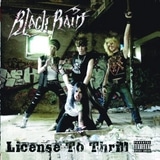 Review:
While most of the newer glam and sleaze bands come from Sweden, BlackRain hails from France. Maybe that simple fact gives them a certain edge that many modern sleaze metal bands unfortunately lack – ferocity.

The “hey hey ho” vocals at the beginning of “Rock Your City” might lead you to the wrong conclusion that this is just another over-produced melodic rock CD, but it soon turns into a full-blown heavy metal head-banging experience and it doesn’t let go. The next song “Innocent Rosie” is, in my opinion, the best track on the album and it kicks some major ass with its great chorus. What sets this band apart from other modern glam bands, ones that are heavily influenced by Crashdïet, is their singer Swan. His pipes could rival the top names in the business, and he CAN use them.

Suffice to say, BlackRain continue to rock throughout License To Thrill with great tunes like “N.A.S.T.Y”, “True Girls Are Sixteen” and “Rockstars Don’t Go To Jail”, a tune whose title I found both very true and very funny. There is one ballad on the record, “No Forever”, but it ain’t no sappy power-pop soap opera of emotions. It is more of a mellower rocker, a really heavy ballad, and it fits perfectly with the rest of the album.

So, what’s left to be said? BlackRain are like a breath of fresh air in today’s music scene. I’ll keep my fingers crossed hoping that they make it big, because they deserve it.