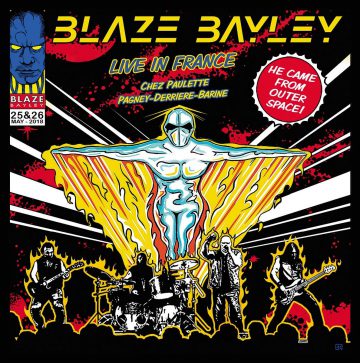 Review:
One of the most underrated or “under the radar” artists out there has to be former Iron Maiden lead vocalist Blaze Bayley. It’s been about 20 years since the Wolfsbane singer lost his gig in Iron Maiden (understandably when Bruce Dickinson rejoined the band) and Bayley has made the most of it building himself a nice solo career and seemingly getting better and better in that regard as the years have progressed. How underrated or “under the radar” is Bayley? Well, Sleaze Roxx for starters hardly provided any coverage to him until 2015 even though the singer released four studio albums — Blood & Belief (2004), The Man Who Would Not Die (2008), Promise And Terror (2010) and The King of Metal (2012) — between Sleaze Roxx‘s inception in May 2002 to 2015 when I took over the reigns as Sleaze Roxx‘s editor. Why the sudden coverage on Sleaze Roxx you may ask? Well, Bayley did front one of the biggest and most recognized heavy metal bands in the world, I have always loved Iron Maiden‘s X Factor (1996) album and it just so happens that Bayley is arguably releasing some of the best music of his solo music career.

Bayley‘s last three studio albums are arguably the best records that he has made since his time in Iron Maiden. The Infinite Entanglement trilogy consisting of Infinite Entanglement (2016), Endure And Survive – Infinite Entanglement Part II (2017) and The Redemption of William Black – Infinite Entanglement Part III (2018) contains some very good songs and it is fantastic that Bayley has given us a “best of” live version of those songs with Live In France. I always love when bands release live albums because it can conjure great memories of a live concert that you may have previously seen. In this case, Live In France reminds me of Bayley‘s excellent performance (along with his all-star caliber backing band of guitarist Chris Appleton, bassist Karl Schramm and drummer Martin McNee — all from the group Absolva) at The Rockpile in Toronto, Ontario, Canada back in May 2019. Granted, Live In France was released before Bayley‘s tour stop in Toronto and the setlist is a bit different, but at the end of the day, there are many similarities and Bayley was touring in support of his latest album The Redemption of William Black during that entire time period.

When I think of Live In France, what comes to the forefront in my mind is not the music (although it’s clearly very good and enjoyable) but Bayley‘s humbleness, sincerity and humour when he is addressing the audience. If you’ve never been to a Blaze Bayley concert, you’ve probably have never seen or heard an artist give such a sincere “thank you” to the audience. It doesn’t matter if there are 50 or 50,000 people in the audience, Bayley is always seemingly giving his all and sincerely thanking the audience for allowing him to do what he does. While the Chez Paulette venue in Pagney-Derriere-Barine, France seemed quite packed judging from the videos below, Bayley‘s most recent gigs in Toronto, Ontario, Canada (in August 2017 and May 2019) were to smaller but nonetheless enthusiastic crowds but the message was the same as on Live In France. Bayley thanked the crowd for allowing him and his bandmates to live their dreams working as professional musicians. Bayley of course added some dry humour by thanking the crowd for supporting the band by buying merchandise while saying how sexy that people look in Blaze Bayley t-shirts. Yes, I know that many other performers thank the crowd at each of their shows but whenever Bayley thanks the crowd, you really feel like he means it and I think that comes across on Live In France.

In terms of the music itself, Bayley‘s solo material live is mostly geared towards his Infinite Entanglement trilogy with six tracks from Infinite Entanglement (2016), four from Endure And Survive (2017) and five from The Redemption of William Black (2018). There are also four songs from Bayley‘s Iron Maiden days, which are nicely spread throughout Bayley‘s set to keep the excitement level up throughout the set. That only leaves one song which is the title track from Bayley‘s debut solo album Silicon Messiah (2000). Clearly, unlike many of his contemporaries, Bayley‘s focus is on the present rather than the past since a whopping 75% of his setlist on Live In France comes from his last three solo studio albums. At the end of the day, it wouldn’t work if Bayley‘s songs from his last three studio albums weren’t any good but as stated earlier, it is actually some of the best songs that Bayley has come up with since his days in Iron Maiden. Tracks like “A Thousand Years” and “Dark Energy 256” would be considered killer Maiden tunes if the latter had released them. I also really like “Calling You Home” and “Fight Back.” The one knock on Bayley‘s live performance on Live In France is that it often feels that he is talking his way through rather than singing his songs but I think that is his normal vocal delivery in a live setting.

Overall, Live In France is a fun live album that showcases Bayley‘s present rather than his past and which should appeal to anyone who enjoyed the Bayley era Iron Maiden albums. I should also point out that it’s great that Bayley continues to play live some of those great Iron Maiden songs from his era since Iron Maiden understandably do not usually play (with the occasional exception of “The Clansman” and “Sign of The Cross”) those songs anymore in a live setting. Live In France also proves that Bayley still has a lot of gas in his tank and finally a really great band to back him up.

Blaze Bayley‘s “Man On The Edge” video (from Live In France DVD):