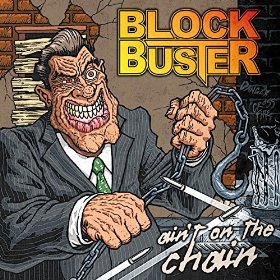 Review:
Block Buster remind me of a poor man’s Airbourne. They play the same style of faster paced AC DC influenced rock and roll as the Aussie rockers but they are simply not quite as good as them. That being said, they are not that far off either. The Finnish rockers are back this time with an even shorter EP than their 2013 EP Hammered & Smashed which had five songs. This time around, Block Buster‘s newest EP Ain’t On The Chain only has three songs.

The good part about limiting the EP to three songs is that all the songs are pretty good. The bad part is that Block Buster could only come up with three new songs after about a year and a half following the release of Hammered & Smashed! Perhaps the Block Buster band members lived the life advocated by the title of their previous EP a little bit too much because a three song output is a bit disappointing. Is the band going to release only one song in the next year and a half? Hopefully, that will not be the case.

Block Buster apparently went with the adage of putting your best foot forward on Ain’t On The Chain since the best track on the EP is the first one “Caught In The Crossfire”, followed by the second song “Ain’t On The Chain”, and then followed by the EP closer “Danger Line”. On Ain’t On The Chain, Block Buster continue to provide nothing really original or that hasn’t been heard before. However, this does not mean that their newest three song EP is not worth listening to. It simply means that Block Buster have done nothing to really distinguish themselves from the myriad of AC DC influenced bands that are out there.