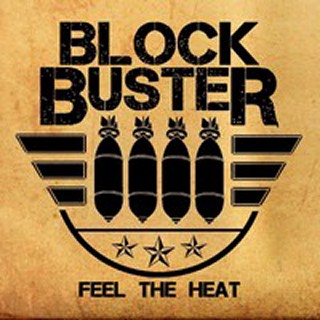 Review:
Every time I hear a band like Block Buster I immediately ask myself if the world really needs another AC/DC clone. The correct answer would be no, but personally I say the more the merrier simply because I love this type of music. To me, the three chord delivery of AC/DC is as primitive and honest as hard rock can be — a sound that captures the true essence of rock and heavy metal (before kids in black face-paint dragged that term through the mud). Block Buster is that type of band, and what they lack in the way of originality they make up for with consistency and musicianship.

When you spin this Finnish band’s debut effort images of Rhino Bucket, ’77, The Poor, Nevada Beach, Rose Tattoo and every other group that wear their AC/DC influence proudly on their sleeves quickly invade your cranium. Like the aforementioned bands, Block Buster lives and dies with the guitar riff — and you’ll quickly find that they have perfected that signature rhythm guitar sound. Depending on your views that is either Block Buster‘s selling point or their downfall — do you want seven songs of shit-kicking hard rock that would go down nicely with a cold beer, or would you rather be intellectually challenged while sipping on a wine? If you answered that latter you might as well skip past Feel The Heat, but if you want nothing more than to rock out dig right in.

“Go Hard Or Go Home” pretty much sums up Block Buster‘s plan of attack, and that’s exactly what they do throughout Feel The Heat. By the time the title track kicks in Block Buster really hit their stride, as the song is a full-steam ahead rocker that takes no prisoners. After closely following the AC/DC playbook, the band up the ante yet again during “Rock ‘N’ Roll Maniac”, a song that slowly builds itself up to breakneck speed and ends this highly entertaining EP on a furious note.

OK… I realize we have heard this all before, but I always look forward to adrenaline driven hard rock and in that regard Block Buster deliver. These guys aren’t reinventing the wheel, and they aren’t pushing artistic boundaries — instead they are a rhythm heavy band that is having fun while stomping their boots through the stage.