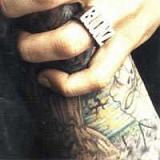 Review:
Some hair bands, like them or not, can be considered pretty successful. Bon Jovi, Motley Crue, Def Leppard and Poison got their fair share of fame, money and pussy. There are other hair bands however that didn’t have that much luck, but still had some fun.

Britny Fox, Faster Pussycat or say the BulletBoys didn’t get what they deserved but definitely had their moment in the sun. But there is also a third line of hair bands that almost nobody has heard about. Some of them barely released a CD, but some of these lonesome releases are real gems. One of them is a self titled record by a band from Georgia called Blonz.

Compromised of vocalist Nathan Utz, guitarist Steve Taylor, a rhythm section of Michael Fandino (bass), Aaron Tate (drums) and with Dennis Ogle on keyboards and supportive guitar when needed, Blonz released only one self-titled CD, shortly after which they quickly went down in flames. But contrary to a lot of other forgotten Sunset Strip counterparts this band really had what it takes. The album, produced by pomp rock icon Steve Walsh of Kansas fame, is a hard rock masterpiece with great riffs and huge harmonies. Some of the songs sound so good due to them being co-written by major names in rock music like Joe Lynn Turner, who contributed on “Hands Of Love”.

The record succeeds due to hard rockers like “Skintight” (co-written with Larry Elskins of Fierce Heart) and “One And Only”, which are some of the most killer hard rockers I have heard recently. This music gives out so much energy a listener wishes he could hop on a speed bike and go skidding on a highway, but don’t drink because you might wind up in a body bag, or a wheelchair or in the courtroom at best. The song “Last Call (For Alcohol)” is just about that. Besides its educational values it’s great both lyrically and musically. Though some rash fans and die hard beer-mongers might sneer with distaste they’ll love it after a few spins.

I don’t know if I managed to convince anyone to listen to this CD. Some of you might have a problem with finding it, because it’s rather a rarity. But I can guarantee that if you’re a hard rock fan it’s worth a search.