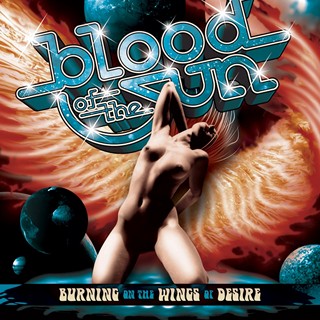 BLOOD OF THE SUN
BURNING ON THE WINGS OF DESIRE
Released November 27, 2012 (Listenable Records)

Review:
Blood Of The Sun aren’t messing around with their fourth album Burning On The Wings Of Desire, creating a hard rock album that sounds both fresh and retro and is meant to be heard with the windows rolled down. Forming way back in 2002, Blood Of The Sun has had a revolving door line-up that in the past has included such artists as Derek St. Holmes, Mark Zamarron and Henry Vasquez in their quest to carry on the tradition of ’70s inspired classic rock.

&nbspThe first track, “Let It Roll”, is straight up sleazy rock and roll — John O’Daniel‘s vocals are vicious, bringing to mind the best of Myles Kennedy or Sebastian Bach. “Burning On The Wings Of Desire” is next with a grooving guitar and vocals — it doesn’t take long to fall in love with this album, and it just keeps going. Some punk shows up in “Can’t Stop My Heart” and then some of the best Hammond organ since Deep Purple‘s early ’70s heyday takes over on “Brings Me Down” and is featured heavily throughout the album. The first four tracks of Burning On The Wings Of Desire are nirvana.

&nbsp”Rock Your Station” is a faster paced song sounding a little forced, as if the band felt they needed to speed up the album (they didn’t). “Good Feeling” returns to the big rock sound with the bonus of some light cowbell. Spoiler alert; bluesy sounding vocalist Scott ‘Wino’ Weinrich, of The Obsessed and Saint Vitus, has a guest appearance on the closing track “Good And Evil”, which for some will be their favorite.

&nbspWith Burning On The Wings of Desire, Texas based Blood Of The Sun have created the ultimate seventies throwback album. Two things that jump out while listening; first, is how good the musicians are in this band, and secondly, I suspect they had fun making this album. Throughout Burning On The Wings of Desire a mix of blues and southern rock flow quickly, leaving you wanting more… I love when that happens!