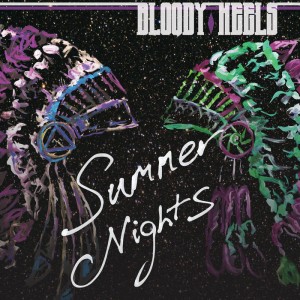 Review:
As someone who grew up in the 80s hair metal era, I am always happy to be taken back to that era with a new release thirty some years later. Latvia rockers Bloody Heels‘ debut EP Summer Nights is definitely a shot of cliché riddled 80s influenced glam / hair metal music. The problem is that Bloody Heels try to incorporate too many things into their sound and I find that their songs are therefore for the most part just too “busy” for my liking.

For instance, the opening title track “Summer Nights” is plagued by too much guitar as the guitar “riff” throughout the majority of the song is really a guitar melody that should be played when there is a break with the vocals. Instead, lead singer Vicky White‘s vocals are sang over this guitar melody which makes it a cumbersome listening chore. I do however really like the guitar solo once either guitarist Harry Rivers or Sheen is able to let loose. The rather speedy ballad “Hungry For Your Love” represents everything cheesy about the 80s — heavy keyboards, an uninspired chorus, the obligatory cheesy guitar solo, and dropping some of the instruments to showcase the chorus late in the song — and easily the worst song on the record. I am quite surprised that the band chose that song for its video release supporting Summer Nights.

My favorite tracks on Summer Nights are easily “Fight To Survive” and “Shot To Thrill” which are both kept a bit more simple, are built on some strong guitar riffs and have some limited gang vocals. I find that White sounds a lot like Bret Michaels during a portion of the verses for “Fight To Survive”. The EP closer “All My Love” is an interesting contrast in that you have some serious guitar licks but at the same time what sounds at times like an out of tune bass in a very “busy” sounding song.

I don’t know much, if anything, about the music scene in Latvia and perhaps Bloody Heels is the best thing going in terms of glam metal in that country. However, when I compare Bloody Heels‘ Summer Nights to most of the other glam metal music in the world, the Latvian rockers’ compositions are quite simply at least a few notches below.