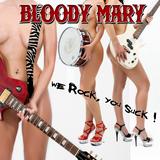 Review:
Opening with a high energy ass-kicking rocker, French trio Bloody Mary start off their debut album We Rock, You Suck! with a bang. This CD sounds fresh and modern yet drenches itself with a 70s rock vibe, complimented by raspy vocals that are reminiscent of The London Quireboys‘ singer Spike.

We Rock, You Suck! continues with the same ‘pack-a-punch’ hard rock style with a lot of crunchy bass on “On My Own” while “Love Is Like Addictive” displays a funky sounding groove. I tend to like a lot of bass in my music, and the moody feeling of “This Time Tomorrow” is a killer bass driven number. “Showtime” has some awesome guitar work, as does “Hollywood”, although the latter song does seem to go on a bit and the usually close to perfect backing vocals are annoyingly screechy in parts. Things slow down with “Restland”, which starts off acoustic but doesn’t turn into a sappy ballad, instead more of a haunting slower song, stuffed full of great harmonies.

“Tequila” isn’t a favorite here as the chorus is a repetitive drone, although singer Pierre Fargetton reminds me of Aerosmith‘s Steven Tyler on this. Bloody Mary may not be wordsmiths, but the lack of lyrical content in some areas isn’t a big enough deal to ruin a pretty decent disc. Finishing with one of the best songs, laden with heavy riffs, “Living It Large” is a great closer.

Bloody Mary has a superior singer in front-man Fargetton, and not only can he sing but he can also play a mean guitar. In fact a lot of the songs on We Rock, You Suck! have deliciously soaring guitar solos – which perfectly fit the band’s rootsy Quireboys, Cry Of Love, and Backwash style.

These American sounding Frenchmen are good musicians with a groovy funk-rock vibe to them. This CD is a bit funk, with lots of rock, blues and soul added to the mix. We Rock, You Suck! will probably never be listed in the classic albums of the decade catalogue, but it would be a welcome addition to most rock libraries.