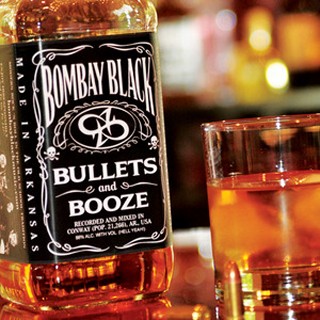 Review:
Take a pretty old school sleaze feel, shake it up with a modern groove and its album number five for Bombay Black. The band are racking up quite a following the old fashioned way, attracting a number of high profile support slots including L.A. Guns, Firehouse and Slaughter — and it’s easy to see why.

We’re told that Bullets And Booze “reflects the tour bus mayhem on ‘The Rock ‘N’ Roll Pain Train'” (which to be honest had me prepared for the worst) and yet here I am literally reveling in newest member Justin Velte‘s fret bothering genius as he crunches, taps and soars through some of the most finely crafted riffs on four wheels. Written by vocalist Erik Johnson and co-produced with bassist Ty Sims, Bullets And Booze sounds crystal clear yet stained and spontaneous with a smoky veneer on the likes of the L.A. Guns inspired “Let Me Be”.

“Queen Of Denial” and “The One You Love” see Erik Johnson‘s raw, swaggering vocals swell catchy verses into party laden pop rock hooks that you’ll be swigging until dawn — before flipping her over and doing it all over again. “Dragon Tattoo” best nails the Bombay Black sound for me but hey, you have fifteen tracks here — far too many to keep the party going, right? Wrong. It really is all killer here from Rob McCauley‘s opening salvo right up until “One Single Drop” with its tinkling piano intro and the timely reminder that ‘if you ain’t havin’ fun, what the hell’s life for?’

Bullets And Booze should be the one to blow the scene wide open for Bombay Black. It’s no mistake that the Gods of hair metal are catching up with Bombay Black — they’ve got some of the best songs they never wrote.