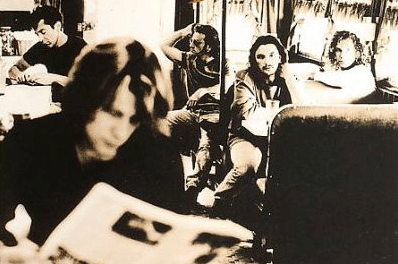 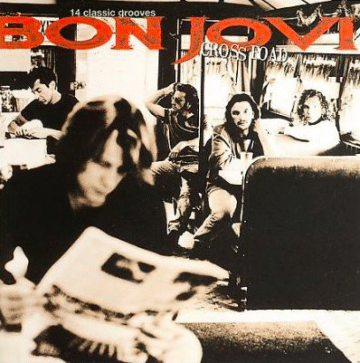 Review:
What can one say about the band Bon Jovi? Growing up in the 1980s, they were one of the top bands on the radio, video, and concert circuits. Plenty of girls were in love with the band, while many guys laughed at them, calling them not hard enough for their ears. Regardless, their music has stood the test of time, and many can name numerous songs by them. Personally, I like most of the albums from the band (and their songs). The band’s Crush album is one of my favorites of the band, with every song being great in my opinion. The album also gave Bon Jovi another shot of success, reinventing themselves to be still relevant with the times. I was sorry to see the band part ways with guitarist Richie Sambora, liking his work with the band more than the newer stuff.

Their 1994 greatest hits release, named Cross Road, has a unique meaning of the title, as bass player Alec John Such left the band, and was replaced by Hugh McDonald by the time the album was out to the public. It was a cross road for the band members leaving a past behind, while continuing towards a future. The album covers the first record through the Keep The Faith release, with a few new songs along with it. For the North American listeners, a remade version of one of their biggest hits was also added with the new songs.

The album starts off with the anthem “Livin’ On A Prayer,” which is a great choice to start the album, with the song coming in from a distance straight into the forefront, blaring with power to start off rocking. “Keep The Faith” is next, and even while I like the song, it is a little let down after rocking out to the opening song. It’s a nice song, but the placement of mellowing out so soon after a blaring of the solid rock groove of song one. I thought this song was not as up to par as the band’s other work. One of the new songs comes in on track three. “Someday I’ll Be Saturday Night” is one of my favorite songs from the band, and keeps the theme of the underdog in life striving and fighting their way to keep going and pushing on, regardless of the obstacles. McDonald is introduced on bass on this more acoustic style song, with a great sing along chorus.

The ballad “Always,” another new track, became a mega hit for the band. I remember MTV showing both videos of the song (something they played often with Bon Jovi, who made several different videos for the same songs); one with just the band playing, and the other with a more concept video which featured a young Keri Russell, who I was already familiar with her from her time on a kid’s television show. She became one of my favorites female actors, before most knew her for her role on WB and FX television shows. Jon‘s vocals on this ballad is strong and shows that he was not just a good looking front man. he produced the goods on songs vocally, as well as songwriting. These two new songs were both home runs in my opinion.

There’s not much to say about the song “Wanted Dead Or Alive” that hasn’t been said before. An anthem for the band, viewing themselves as cowboys taking over the towns, and the song helped make the unplugged craze on MTV launch out, where musicians could strip down their songs for profit. Although stripped down songs have always been around, most credit Bon Jovi as the ones who brought it in the forefront during the 1980s. The album gets back to rocking with “Lay Your Hands On Me,” and “You Give Love A Bad Name.” After track one on the release, the songs are mellow or ballads, but these two songs don’t allow the up tempo fans to be left out.

Another one of my favorite all time songs by the band is “Bed of Roses.” As I have stated many times in my reviews, I like ballads on albums, and growing up in this time period, almost every band had to have one on the release in order to sell records. The reason I like this song so much is lyrically, not just musically. The song starts off with Richie Sambora‘s  solo on the guitar that adds a flavor to the song, but Jon‘s lyrics, which mentions a marching band, The Holy Ghost, and a “kings random in dimes” are just wonderful references in a pop song. I also love the line “As I dream about movies, they won’t make of me when I’m dead.” I have a degree in English, and I could not dream of writing this underrated poetry, no matter how hard I try.

I remember when I bought this CD, my friends  would wonder why the band put Jon‘s solo song “Blaze of Glory” on the band’s greatest hits release. I didn’t have a problem with it because (1) I didn’t want to have to buy the soundtrack of Young Guns II to get the song on CD, and (2) “Runaway” technically wasn’t a Bon Jovi song (in terms of this line-up), because it was released before Jon had the band together. This song has grown on me throughout the years, where I wasn’t a fan of it much when it first came out. Track ten is where I have a problem with the album. Why remake “Livin’ On A Prayer,” rename it “Prayer ’94,” and put it on the same record as the original? I did not like this version when it came out, and still do not. The only thing I enjoyed about it is Sambora can be heard more vocally with this slower paced version. Some fans like this better than the original, but this one makes me scratch my head. I would rather have had something like “I’ll Sleep When I’m Dead” or “In These Arms” from the Keep The Faith release, or even another song from the first two albums (which only gets one song each), than a remake of something I already heard earlier on the record. There is nothing wrong musically with the song. I just don’t see the need to have it on here. I always skip this song.

The hits “Bad Medicine” and “I’ll Be There For You” comes after the remake to keep the radio friendly singles flowing. “Bad Medicine,” again, was one that had two different videos — one with the band performing, and the other, where fans (led by comedian Sam Kinison) shot the band playing the song. Both were MTV regulars, and made me want to see them live, although I never saw them in concert. “Bad Medicine” shows drummer Tico Torres‘ skills. Although he is not always named as one of rock’s best drummers, I think he always provides a solid strong, backbeat to the songs. He is an underrated drummer. The album closes with “In And Out of Love” and “Runaway,” detailing the band’s earlier songs. I remember hearing “In And Out Of Love” at my school dances when I was in junior high. Although it wasn’t a danceable song, I remember the days when the deejays played hard rock and a variety of styles before the end of my high school years, when all they played was rap. I always liked “In And Out of Love,” but never got into “Runaway” as much as the other songs from the band, but it is still a great closer for the album.

One of the things I like about Cross Road is that the songs are not in chronological order from the early songs to the more recent, along with the newer songs are placed throughout the album and not all placed together, so they could be heard next to the more well known songs. As I said earlier, I would’ve liked the two earlier albums more represented (there was one greatest hits album from the band that was only released in Australia featuring the first three albums), or another rocker instead of “Prayer ’94” Reviews are personal opinions right? However, this is a nice package for those that want to have a collection of their radio songs, as an introduction to the band’s work. The overall flow of the release is nice, without having to skip many songs. This is a release that one can’t go wrong with owning.

Bon Jovi‘s “In And Out of Love” video:

Bon Jovi – In And Out Of Love

Music video by Bon Jovi performing In And Out Of Love. (C) 1985 UMG Recordings, Inc.