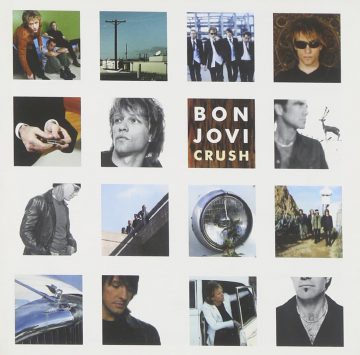 Review:
Before I bought Bon Jovi‘s Crush release, I only had Slippery When Wet in my collection, and it was on cassette. I was only a fan of a few of the tracks from New Jersey overall, so I started checking out during that period of the band. Even though it was five years between studio albums when Crush was released, for me it was a lot longer than that when it came to listening to the band. Crush was a defining album for the band, in terms of reinventing themselves in the music world by trying to prevent themselves from being known as a 1980s glam scene band after the more darker bluesy These Days release.

The opening song, “It’s My Life” (the first single from the release), gave a tribute to their most successful work from Slippery, with a song with similar formats — Richie Sambora using the talk box, the lyrical salute to the characters Tommy and Gina (from “Livin’ On A Prayer”), along with the legendary singer Frank Sinatra reference. Tico Torres‘ drumming carries the song for the most part, and although the 1980s throwback references were there, the song was still current. This is another anthem for the band, along with the theme to live life on your own terms, and not giving up when chasing dreams.

“Say It Isn’t So” is the only video I remember from the band from the release. Before I looked up the video for researching this review, I remember the fact that it had something to do with Hollywood and acting, something Jon was doing quite a bit of when not recording. The video featured many current stars, and had a similar concept to the ending of the movie “Blazing Saddles,” where fights and interruptions occur throughout the numerous movies sets. I like the song lyrically for the references to Superman, Elvis Presley, and Mickey Mouse. Jon, along with co-writer Billy Falcon, give the normal failing relationship a humorous feel to it lyrically. Another interesting side to the song is the lack of a guitar solo, letting David Bryan on keyboards take the solo, where he mostly gets solo work on the ballads from the band.

Jon and his outside songwriters create a wonderful ballad next with “Thank You For Loving Me.” The orchestration and blues style guitar fills gives fans something to enjoy from the classic days without sounding dated. “Two Story Town” deals with a guy tired of living in a worn out city, and decides he needs to do something fast to get out of it. To me, the song’s guitar parts has a Tom Petty style to it, along with a Bruce Springsteen form of lyrics, similar to his “My Hometown.” The song starts to end, but then continues until the fade out, which adds another enjoyable part to the song. The next song, “Next 100 Years” is a long track, coming in at almost six minutes. Sambora‘s backing vocals are more heard on this song, and his guitar solo at the end makes this song for me. Otherwise, this is a song I usually skip over.

“Just Older” is one of my favorite Bon Jovi songs. The theme of a guy running into a childhood friend, talking about how he is still chasing dreams and although he looks old, he’s “just older.” The rhythm of the song is catchy, along with the sing along chorus. The second verse on the song seemed symbolic of Sambora and Bon Jovi‘s friendship over the years (at the time), along with the dynamics of the song, rocking out, then pausing in the middle before bringing the intensity up again. This is a well written song, inspiring those to not adhere to what society thinks is being “too old” for something, or having to prove your personal worth to someone else. This is a song that people should listen to before attending class reunions if they are comparing themselves to others.

“Mystery Train” has the same structure and feel of Soul Asylum‘s 1993 “Runaway Train,” which is a song I never cared for (or the band). To me, this song is not as good as the first six ones. “Save The World” starts off with a gentle, wailing guitar lead that is reminiscent of the later Beatles‘ work with George Harrison‘s style. To me, the lyrics dealing with a guy who doesn’t have much, but believes he can do anything with his girl by his side, is a better written track than the previous song. This has a movie soundtrack feel to it, and is a longer song as well, at five and a half minutes. After the first six tracks, these two tracks in a row start to dwindle the album a little for my liking.

“Just Older” is one of the songs I first think of when looking at this album. The next track is the second song I think of called “Captain Crash & The Beauty Queen From Mars.” It starts off with Sambora‘s guitar in a distance coming into the forefront, exposing us to a unique romantic couple in the lyrics. The title, and song, seems to be a salute to David Bowie‘s alter ego, especially mentioning “Dressed up just like Ziggy, but he doesn’t play guitar”. I like the lyrics throughout, referring to other stars like “Fred and Ginger” and “Sid and Nancy,” along with the line “mixed up as a milkshake.” Tico Torres‘ drumming has a swing style to it, but the song doesn’t shy on a being rock. Tico is one of those drummers that never gets mentioned as much in the great drummers’ list. He isn’t flashy or over the top in his style, but he puts in solid work every time. This is just a plain fun song that I like to listen to for no particular reason at times when I want to listen to Bon Jovi.

A hidden gem on the album (besides the previous song that many forget about) is “She’s A Mystery.” Having two songs on the same album with “mystery” in the title may seem odd, but if you must choose one over the other, pick this one. The musicianship has a Hawaiian island feel to it, with the vocals and guitar work give it a dreamy setting. Again, a later George Harrison or classic country influence with the guitar can be heard here. Another Tom Petty style song, “I Got The Girl,” has a mix of a solid pop song, once it gets moving after a slow introduction. The bass introduction from Hugh McDonald makes this song. Other than that, nothing excites me about this track.

The album ends on a party note, with “One Wild Night.” Sambora‘s slide guitar solo, and dance beat makes this a fun way to end the release. Jon‘s catchy singing with the “Na Na’s” after the solo, and the backing vocals by the band, gives a throwback to the fun 1960s pop hits, like Mitch Ryder‘s “Devil With A Blue Dress On,” only updated. This is a great way to end the album, coming off some lackluster songs on the second half.

Crush overall is an album full of two halves; the first half is filled with catchy songs and some quality ballads, where the second half takes a hit or miss approach. One of the things I personally have a connection to the album is because my friend’s brother was working with the band at the time, and seeing his name in the liner notes was pretty cool. This is an album that got me excited in the band again, where I even went out and got the VHS concert video from the tour, because I enjoyed some of the tracks from the release so much.

Musically, Crush took the band out of the path of possibly being just a nostalgia band and gave a spark to the members, along with the fans who were led away from them for various reasons, like myself. The maturity of Jon‘s voice also added to the release. This is one Bon Jovi album that was a defining moment in the history of the band to keep it from being outdated.