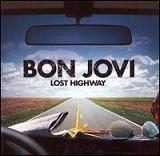 Review:
Everybody has been talking about Bon Jovi ‘going country’ so I expected this CD to be a lot worse than it is. I wouldn’t call this country but it sure isn’t rock either – it’s more country-pop, if there is such a thing. It also doesn’t surprise me that Bon Jovi have gone down this soft rock/with a country flavor highway because they have always semi-flirted with that sound (think “Wanted Dead Or Alive” and you get a feel about what this disc is about).

The title track “Lost Highway” is catchy enough, as is “Summertime” – this is a feel good happy little number. “We Got It Going On” is just plain awful, as is “Till We Ain’t Strangers Anymore” – the duet featuring Leann Rimes, but country is her forte so you know what to expect and it’s as painful as I knew it would be. The other tracks sound pretty much the same as everything else, which doesn’t mean they are terrible, just nothing stands out.

Lost Highway is slightly boring, unadventurous stuff, but still rather pleasant easy listening and it won’t offend the neighbors or the mainstream radio stations. You could put this on at a family gathering of all generations and not have anyone complain or ask what that awful noise is. This doesn’t get me terribly excited, but it doesn’t make my ears bleed either.

Jon Bon Jovi has always had a great voice, even if you don’t like Bon Jovi you can’t deny that he can sing, and his voice is perfectly showcased on Lost Highway on the (way-too-many) ballads.

If you want a classic Bon Jovi Slippery When Wet sound you won’t find it here. Despite the critics, if the mainstream charts and the sales for their current world tour are anything to go by, Bon Jovi haven’t been shot down in a blaze of glory even with this mediocre but acceptable effort.