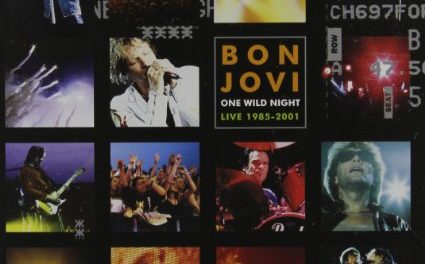 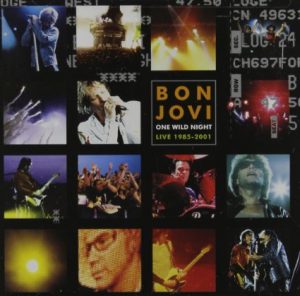 Review:
With the 15th year anniversary of the release of Bon Jovi‘s One Wild Night – Live 1985-2001 taking place yesterday, I thought that this would be a good time to review the group’s first live album.

One of my biggest pet peeves when it comes to live albums is a band delivering a live album consisting of tracks plucked from many different tours with a wide gap in years and varying line-ups. What this presumably tells me is that the group is not good enough to pull off a full show that can be recorded and offered to its fans. I get that many albums are recorded over the span of a few selected concerts and that the best songs from each show are selected to make what seemingly might feel like one continuous show. However, for most live albums, this means recording a couple of concerts from the same tour with the same line-up.

In the case of Bon Jovi‘s One Wild Night – Live 1985-2001 live album, you have at least presumably three different tours represented, a gap of more than 15 years between the first recorded show (in April 1985) to the last one (in November 2000), and a change in the group’s line-up (bassist Alec John Such only plays on two of the live tracks while replacement bassist Hugh McDonald plays on all the other tracks). I simply do not understand why Bon Jovi would have elected to release a live album consisting of two live tracks recorded in 1985, four live ones from 1995-96 and the rest from year 2000. Why not record and offer an entire set from one tour instead? Why not treat your fans to a complete live show from a 1985 era set? Why not release three separate live albums — one featuring the 1985 setlist, one showcasing the 1995-96 setlist and the other highlighting the 2000 setlist? Sure, there would have been some songs such as “Runaway” that would have likely been repeated on those three live albums but it would be cool in any case to hear whether Bon Jovi would play the track live a little differently in a 15 year span.