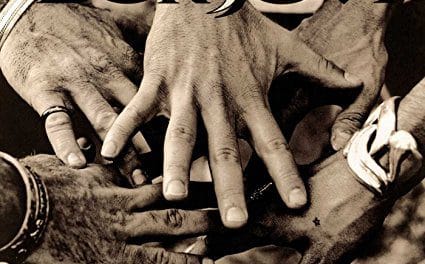 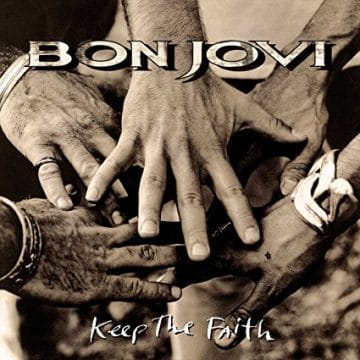 Review by Lance Lumley:
Bon Jovi‘s Keep The Faith album is one of change for the band. After having two smash albums in 1986’s Slippery When Wet and 1998’s New Jersey, the band showed a maturity and growth in songwriting, trying to focus less on just parties and girls going into a new decade.

Singer Jon Bon Jovi and guitarist Richie Sambora were both coming off of solo albums at this time, with Jon hitting #1 on the charts in 1990 with the song “Blaze Of Glory” from the Young Guns II Soundtrack, while Sambora released the 1991 Stranger In This Town album. With its first release for the new decade, could the band keep up with the harder edge acts and a new form of music coming on the horizon, like grunge? The opener “I Believe” still kept the arena rock type feel that the band was known for, along with the third track “I’ll Sleep When I’m Dead,” which has been a concert staple for the band ever since. The ballad “Bed of Roses” is another song the band has kept in its touring song list throughout the years as well.

The first half of the album is very solid, with well-groomed songs. Jon, along with writing partners Sambora and Desmond Child whipped up songs that did not fall behind New Jersey without sounding dated. Track number four “In These Arms” (written with Sambora, Child, and David Bryan) is a great pop song that fits well in the Bon Jovi catalogue and was one of the known singles off the album, while the title track is an early sample of Jon‘s political commentary in songs. The almost ten minute track “Dry County” could have been featured in a movie soundtrack lyrically, and is a topic that could be relevant today. Musically the song is underrated after listening to it years later.

The rest of the album, with the songs “Woman In Love,” “Fear,” “Blame It On The Love Of Rock & Roll,” and “Little Bit Of Soul” end out the album but wear thin after listening to the first half of the album. “Blame It On The Love Of Rock & Roll” sounds no different than the earlier track of “I’ll Sleep When I’m Dead” and keeps the same formula, but is not as strong as the latter, which is one of my all time favorite Bon Jovi songs. The same goes for track ten “I Want You” which is a ballad that follows the same Bon Jovi formula, but with “Bed Of Roses” and “In These Arms” on the same album, falls short.

Keep The Faith was the last album that bass player Alec John Such was on with the band, and even though the album sold well, it did not sell as well as the last two albums of the band. The band also went with producer Bob Rock on the album, as opposed to Bruce Fairbairn, who did their previous albums. This album is a turning point in Bon Jovi‘s recordings, taking them to a different direction in songwriting than the just party tunes from the 1980s.

Even though I think the album’s strength is still in the first half of the album, there is still great musicianship overall throughout and it still holds up without sounding dated.

Review by John Stoney Cannon:
Oh yeah, the grand ’90s. For some, not the best time for rock and roll and in 1992, it seemed like the final strains of any nod to ’80s hair metal could only be found in a few cool debut releases by bands like Lynch Mob and Jackyl while veteran acts like Def Leppard, Warrant, KISS and W.A.S.P. were hanging in the mix with new solid albums. Another veteran band still standing firm was Bon Jovi, who in 1992 released their fifth album, Keep The Faith.

Now if I’m to be any bit honest, I will have to admit to being a fan since hearing the last half of the song “Runaway” on local Augusta, Georgia rock radio sometime in 1984 and to this day, while maybe not the most popular statement to make, I still can find songs on new Bon Jovi releases that blow me away. Blame it on my childhood love of stories, point a finger at me being a hopeless romantic, hell pin it on Jon Bon Jovi’s ability to write songs so close to reality that the average Joe can relate, whatever. All I know is that to this day, I can get sucked into the right Bon Jovi song — easily. This could possibly also explain why the music of not only Bon Jovi, but also fellow Jersey native Bruce Springsteen continues to be an influence and inspiration on my own songwriting. But anyway…

In 1992, Bon Jovi were riding high after patiently growing from a local bar band into international mega stars over the course of four awesome albums including their self-titled debut (loaded with catchy rock tunes), the underappreciated 7800° Fahrenheit, and massive hit albums Slippery When Wet and New Jersey. Jon even had a hit with the soundtrack to the film Blaze of Glory so one would have to kinda excuse Bon Jovi if their next album was, well… kinda half-ass.

Lucky for fans, Keep The Faith was the farthest thing from half-ass. Well, I would have to think that most people wouldn’t consider reaching number five in the US and number one in the UK and Australia on the way to attaining double platinum status half-ass. Three pretty decent hits out of six released singles certainly didn’t hurt either. But for my money, what makes Keep The Faith a great album isn’t the fact that someone did a great job picking singles to release, it’s the fact that ANY of the songs on Keep The Faith would have been a great pick to release as a single. While there’s no arguing that “Bed Of Roses” and “Keep The Faith” have earned their way onto any Bon Jovi concert setlist, “In These Arms” is as infectious a song as has ever been written and “I’ll Sleep When I’m Dead” contains everything needed to make a great arena anthem. These are just the tip of the ice cream cone. To this day I can pop Keep The Faith in my car CD player and cruise around without once hitting forward. Try doing that with a Nickelback CD.

Years ago — mid-’80s to be exact — I walked into a studio while a friend of mine was spending the afternoon with a soon to be hot band and there hanging out was Jon, freshly introduced to the world and still a little ways from becoming the international star he is now. To this day I can still recall being all fanboy and saying something like “Hey! It’s you!” to which Jon looked around madly shouting “OH MY GOD! IT’S HIM!!!!” Then as quickly as he jumped into hyper mode, he calmly held out his hand and said “Hey man, my name’s Jon. Nice to meet you.” Before he left, he gave me a few words of encouragement which to this day is duly appreciated as I know that he didn’t have to go out of his way to do so.

When I first saw the cover of Keep The Faith and read the title while glancing at the image of the hands “all in”, my mind immediately went back to that conversation. OK, “conversation” is maybe a bad choice of words as it was pretty much just me shutting up and listening to a room of great musicians talk shop. Just like many of the bands’ songs, I can find personal meaning and in some, comfort, in others answers, and in still others, proof that we all sometime have dreams. Perhaps the saddest part of having dreams is that for many the ability to dream gets lost along the way but thankfully bands like Bon Jovi exist to write songs that help us dream or well just, keep the faith.

I think my favorite song on Keep The Faith might be “Blame It On The Love Of Rock & Roll” which in one song almost sums up everything inside of me that has resulted in me being branded the “Rock & Roll Junkie.” For some, it’s love. Other people are addicted to things like sports. For me, it’s been music for as far back as I can remember and while I have to admit to being sucked in by the sweetness of catchy pop early on, somehow I was sucked into the realness of music at an early age. Maybe this is why I hold the music of Bon Jovi so close to my heart. Yeah, you can have loud guitars, cool bright outfits, wild hair, and all kinds of shock but if the music doesn’t stick, it’s just this year’s hot Christmas item if you get my drift. Alice Cooper proved that not that long ago by going out on a smaller venue tour with a scaled back show and I, for one, was not surprised when the songs were what carried the show.

Keep The Faith might not be the first album fans yell out when prompted for a discussion on the best Bon Jovi albums but it’s kinda hard to argue against it being a great album loaded with great songs. Of course just like anything else in life, this is surely debatable but that fact also adds to the validity of its place as a consistently strong album song-wise. If it wasn’t such a well put together release, who would even care about discussing it?

Matter of fact, the last real strong argument I did hear against the coolness of Keep The Faith? “I can’t believe he cut his hair!”