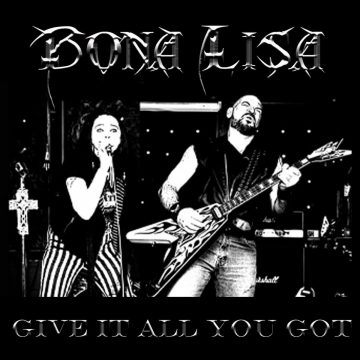 Review:
Blasting out of the speakers like early Pat Benatar fronting Mean Streak era Y&T, rockers Bona Lisa spit out a hard-hitting sound far removed from the beach soul and southern rock sounds of South Carolina especially when you consider that the most notable female singers to come out of the Palmetto State include jazz artists Etta Jones and Eartha Kitt. On second release Give It All You Got, Bona Lisa set out to prove that South cackalacky is musically made up of more than just beer bottle clanging Hootie and the Blowfish college anthems and seashore shag soul. Yeah way more.

While the underbelly of Columbia, South Carolin’s music scene has always been sprayed with a consistent roll of underground indie, punk, and post hardcore bands over the years, it has just recently come to my rock and roll attention that this large city chock full of incredible Americana and alt-bluegrass artists is also loaded with badass female-fronted in your face bands like the punk straddling metal quartet Brandy and the Butcher and the eighties metal husband and wife duo Bona Lisa. While criminally pretty much invisible to the local press who dote on their preferred Americana, pop, indie femme darlings, in true metal fashion, Bona Lisa take a back seat to none and thankfully so, despite not being considered “en vogue” the music is just as good (and in some cases better) than anything female-included artists are putting out these days in South Carolina. But hey, when outside of the eighties has metal been the cool kid especially where press is concerned? Chuck ’em if they can’t take a listen.

Once again, singer Donna Milikin and hubby guitarist Andrew Milikin deliver a five track offering that retains the same musical energy as their self-titled debut release from a few years back but takes a power packed leap forward vocally. Bona Lisa in 2017 was by all accounts badass, but on Give It All You Got, they are pretty much on the ball with most independent metal to pass through my ears lately and that improvement is largely due to the don’t hold back vocals. Starting with chugging hard rocker “Without You”, Donna goes for the throat and despite the lyrics, doesn’t actually let go keeping up clear to the end of the fastest tune on the album. Refusing to just sit back and ride on the rockets of his wife’s pipes, Andrew once again delivers the hard driving guitar that Bona Lisa‘s sound has steadily been built on topping things off with an air guitar worthy lead solo that manages to rip without being too over-the-top. Add in a solid rhythm section and you pretty much get the heavy metal idea what Give It All You Got is all about – total early eighties raw energetic anthem metal perfect for a packed, sweaty head banging audience and infused with just enough changing content to keep things plenty interesting.

“Lost Son” is a galluping metal ode to heritage starting with the bouncy sound of uilleann bagpipes before ripping into a European hard rock blend perhaps best attributed over the years to say Thin Lizzy at their Irish-nodding best. Bona Lisa obviously realizes that you can’t go wrong taking the tried and true best of metal’s classic past and giving it a bit of new energy and successfully do so throughout Give It All You Got with the audience anthem title track taking a riff and drum-driven cue from the likes of AC/DC and Def Leppard. They then deliver on that metal dark side ala “Run For Your Life” before dropping total head-banging goodness on closer “I Want Out.” Bona Lisa make the best out of five tunes, giving just enough to wear a metalhead out while contemplating a beer energy boost and a second dive in.

Like most music 70 years after rock and roll reared it’s philthy head, Bona Lisa deliver little that’s new or groundbreaking but what they do offer is five tunes of greatly missed, melodic hard rock played by humans and filled with tasty guitar and aggressively powerful yet understandable vocals. Musically, Give It All You Got is loaded with all the headbanging riffs fans of early ’80s metal hunger for and vocals that even the most discriminating of metal fans would eat up. Yeah, we know most metal dudes like their metal singers all macho and stuff but take it from me, this chick can hold her own even causing one journalist to write, “Is it still cock rock with a woman out front?” Take a chance guys and find out and if you’re still just a tad apprehensive, just cover up the jewels before you step up. You’ll be glad you did.