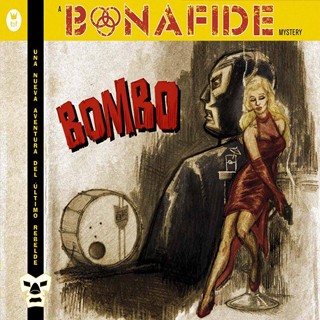 Review:
This is a tough album for me to review because I am a big fan of Bonafide and I was truly hoping to hear in Bombo an amazing follow-up to the surprisingly good Ultimate Rebel. Instead the Swedish hard rockers have delivered a new album that falls quite short and is nowhere as good as its predecessor. To illustrate just how disappointed I’ve been with Bombo, I heard it a couple of times but was so unimpressed that I put it aside for a few weeks before returning to it once again for the purpose of this review. Unfortunately, Bombo was not much better a few weeks later.

Bombo kicks off with the same titled track — which has one of the worse openings that I have ever heard for an album. The words “Bombo” are mentioned/sang in a soft spoken tone before the guitar slowly kicks in which leads to a decent and admittedly infectious guitar riff for the rest of the song. “Bombo” is actually a pretty good track if you take out its intro — I simply do not understand why Bonafide would want to have their album start off so meekly. My two favorites off Bombo follow next — first up is “Backroom”, which would have fit in nicely on Ultimate Rebel, and then “Bad As Clint”, which starts off with some whistling — sigh (yes, some whistling) — mimicking the music for an old western but the rest of the song rocks. Since I have always enjoyed the most popular music/themes from old western films, I do not mind the whistling intro to “Bad As Clint” although it does not have any business being there. Instead, I chalk it up simply as ‘Mr. Bonafide’ — lead singer, guitarist, main songwriter, and producer Pontus Snibb — must have forgot to take that intro part off the song before Bombo started going into mass production.

“D.T.R.D.” is not bad except that the slower portion of the song, about halfway into it, is painful to hear and the singing in particular seems void of any emotion. “Harmony” is an ‘OK’ ballad, nothing special there, while “Better Safe (Than Sorry)” is another of the better tracks on Bombo. However that song title really sums up what Bonafide seems to have done on Bombo — which is play it safe, play things a little slower and simply try to follow the formula from past albums. Unfortunately, the band falls short by not coming up with anything new or special. The final three songs on Bombo don’t do much for me.

Overall, Bombo is a big disappointment compared to Ultimate Rebel. One just has to listen to fantastic songs such as “Doing The Pretty” and “Rough Cut” off the previous album to figure out that Bombo is nowhere near as good. That being said, I enjoy Bombo a little more every time that I listen to it, but it shouldn’t take me five to ten listens to start to like a song. I would usually not give most albums such a long audition, but only did so for Bonafide because Ultimate Rebel was one of my favorite CDs of 2012 — and I suspect that the songs here would sound a lot better in a live setting. I am willing to overlook this disappointing effort from Bonafide and hope that a much better album will be in the works before too long.