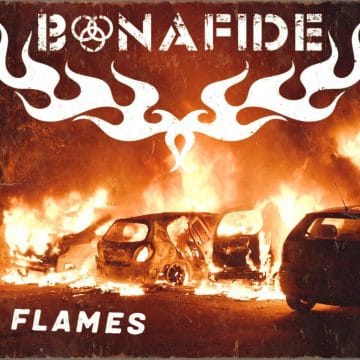 Review:
When Bonafide announced in December 2016 that they were releasing their seventh album Flames, I was excited to hear it. Not because I was expecting something huge or different. Not because there was an onslaught of hype leading up to it. I was excited because I knew it would be more of the classic hard rock music sound that Bonafide are well known for and that it would be a solid release. I was not disappointed one bit.

Bonafide have made their mark on Sleaze Roxx readers in the past as Something’s Dripping and Ultimate Rebel both made the Sleaze Roxx’s Top Ten Albums of the year list respectively in 2009 and 2012.

Every song on this disc is solid and there is not a bad one at all. Pontus Snibb belts out strong vocals on each tune and gives us that raspy vocal style that we’ve come to expect from him. I know many who like to compare these guys to early AC/DC, and that’s very easy to do along with the classic rock riffs of Anders Rosell, but I disagree. I think Pontus has a very unique sound all to his own and that Bonafide own that sound to themselves.

The album starts out with the track “Back In Flames” which takes us right back to where 2015’s Denim Devils left off. It’s a great foot stompin’, finger tappin’ opening salvo that immediately puts you in the Bonafide state of mind and gears you up for the rest of the album. The next two tracks — “Smoke & Fire” and “Power Down” — are typical classic hard rock, Bonafide style songs, which are well written with simple bluesy guitar riffs that suck you in. The fourth track “Bottle Of Jack” is by far my favorite song on the album. If I had to pick an “anthem” from this album, this would be it! It’s just a good fist raising, foot stomping, bar room song. The rest of the album follows the same tried and true formula of just good old rock and roll. “Flipside Groovin'” is a song that I could easily picture being played on any AOR/classic rock format radio station.

As I listened to this release, I didn’t find myself skipping or skimming tracks which I typically do to get through a lot of music. Each song on the album kept me interested, kept me tapping my fingers and feet at my desk. Flames is that kind or the type of album that you can just put on and listen to all the way through. It really is that solid from start to finish. But this is what I’ve come to expect from Bonafide — simple, catchy, well written, classic hard rock. As expected, I was not disappointed. Another very solid release from Bonafide. Well done boys.

The new single from swedish rockers Bonafide!Released December 16th 2017, taken from the upcomingalbum FLAMES! New album FLAMES out February 24th 2017 on Off…