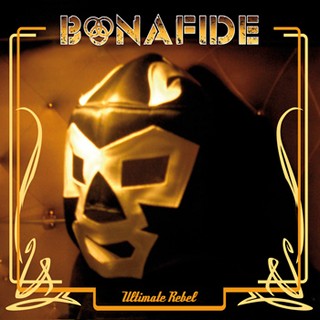 Review:
Bonafide have steadily made a name for themselves in the last few years through endless touring and releasing two excellent full-length albums. Now it seems the Swedish rockers are more than ready to take the next step and break into the charts and the UK-market with their third album titled Ultimate Rebel.

If you’re familiar with their past output you’ll already know what to expect from Bonafide — straight ahead hard-Rock’n’Roll in the vein of bands like AC/DC and Humble Pie. And like their idols, Bonafide are not going to change anything major about their sound anytime soon. So basically what you get with Ultimate Rebel is another ten songs to sip your whiskey to or for driving pedal to the metal on an open road. But after a couple of spins you’ll realize that in fact Bonafide did make some changes to their sound. While the songs off their self-titled debut and Something’s Dripping lost some of their initial magic (not in live environment though) and sounded a bit same-ish with repeated spins, the new ones actually get better with time. That’s mainly due to the fact that Bonafide have managed to further hone their song-writing skills, giving more attention to details and arrangements.

Pontus Snibbs‘ unique vocals are stronger than ever and the production sounds fresher than on their previous output. Furthermore, songs like “The Mess”, “Blue Skies Red” and “Rough Cut” are prime examples of a band that has found its own brand of rock. Up-tempo songs like the album opener “Make My Own Rules” and “I Want Out” add further proof to that. Hell, even the brilliant “Rag And Bone Man”, with its obvious nod to Angus Young and Co. doesn’t sound like AC/DC — it simply sounds like Bonafide!

Somehow I feel compelled to compare Ultimate Rebel to what Powerage was for AC/DC after Let There Be Rock — staying completely true to their roots, but adding an extra dose of melody and finesse. Bonafide are heading for the never-ending road again starting in the autumn of 2012, probably writing their next record in and out of hotel rooms like they did for Ultimate Rebel. Exciting times are ahead for the band — go see them live and be part of the process!