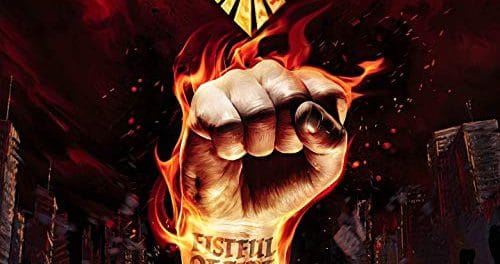 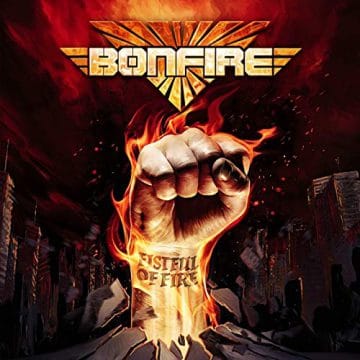 BONFIRE
FISTFUL OF FIRE
To be released on April 3, 2020 (AFM Records)

Review:
So Bonfire have been around for a few decades now. Hans Ziller founded the band out of Ingolstadt, Germany in 1972 under the name Cacumen. It wasn’t until 1986 that Ziller changed the name to Bonfire due to pressure from management and the record company. Fistful of Fire is now Bonfire’s 17th studio album under that name. That doesn’t include seven live albums and six compilation / greatest hits releases. The Wikipedia article provides a very interesting read into the band’s history, if you’re into that sort of thing. Honestly, Bonfire didn’t hit my radar until I discovered their most excellent cover of “Sweet Home Alabama” from 1999’s Fuel To The Flames. Do check that out if you’re not already familiar with that one. Since then, the band has been noticeable but not overwhelming to me.

Right off the top, Fistful of Fire contains not one, not two, but three intro selections of about one minute in duration. I generally hate these sorts of album-padding additions. It really means Fistful of Fire has 11 tracks, not the impressive looking 14 as advertised. “The Joker” at least provides a lead in to “Gotta Get Away.” The combo together works as a solid opening track to the album. The verse is a bit soft, but both the lead and rhythm guitars save this AOR track. Once you get past the superfluous keyboard intro to “The Devil Made Me Do It”, there is a drum line driven song that peaks on Alexx Stahl’s high register vocals.  The keyboards fade into the background pretty quickly once the song kicks in.

“Ride The Blade” makes you work for it, in that it starts without much interest. Again, the drums drive a solid guitar line and produces a good tune. It makes me think of the Scorpions to some extent. Now we’ve hit track five and the obligatory interpretive ballad “When An Old Man Cries” is up. Meh. Fistful of Fire is so much better than this track, however earnestly it’s played. Holy hell! Is “Rock ‘n’ Roll Survivors” crunchy and aggressive!  This could be a wild arena show display, and it isn’t the only one on this album. The second half keeps getting better. “Fire And Ice” opens with a fantastic guitar line and keeps going from there. Still loving Stahl’s vocal range. “Warrior” is a bit of an ’80s throwback, focusing on keyboards over guitars. It’s pretty much the weakest track here aside from the ballad, even though there is still some half-decent solo work from Hans Ziller (I assume, since there are no liner notes).

Following another useless 1:20 intro, “Breaking Out” is by far my favourite song on this album. It combines a Ratt style intro with a Europe combination of guitar and deep background keys. Vocals and drums expand the track into a really good song. I’m adding this one to my curated mix of driving tunes.  I liked how it started, but  “Fistful of Fire” is a bit slower. There are some off-chord insertions during the bridges that don’t really seem to work…. Too modern sounding in my opinion, compared to the overall theme. We then progress to another 1:10 intro “The Surge” which could be a horror movie trailer soundtrack but not worth the time on this album. It does lead into the high energy “Gloryland.”  This is a solid hard rocker and I hear some vocal throwbacks to Rob Halford in delivery, if not pitch. Finally, the Digipack includes a forgettable acoustic version of the already dreary ballad “When An Old Man Cries.”  Hard pass on this one.

Although I’m a relative Bonfire newbie, I have known the name brand for years. Admittedly, I am not qualified to suggest how it stacks up to the band’s 40+ year discography. Regardless, Fistful of Fire is mostly a solid album in and of itself, and I’m enjoying it on its own merits based on what I’m listening to. You can’t go wrong with Bonfire here.