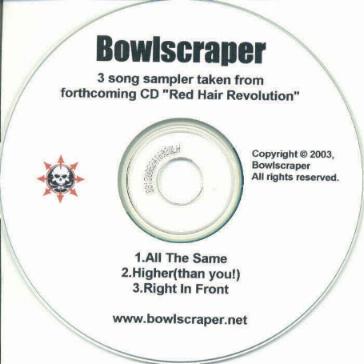 Review:
With the demise of Pantera, somebody was bound to step from behind their shadows, so why not Detroit’s Bowlscraper? Angry, mean and doped up, these Motor City madmen make Ted Nugent look like a choirboy! Personally I grew out of this type of music in high school, but I still enjoy when a band does it so convincingly.

This is a three-song sampler from the group’s upcoming Red Hair Revolution. “All The Same” mixes things up with the guttural Pantera style vocals and a more straight-ahead approach, with excellent results. However by the time we reach “Right In Front” the band has become unrelenting, and I found myself losing interest. It’s hard to say what the full-length will produce — but there is potential here. The band can be found at www.bowlscraper.com.