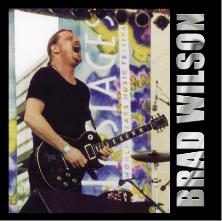 Review:
Singer, guitarist and songwriter Brad Wilson has been making a name for himself with appearances on such movie soundtracks as Vampires and Ghosts Of Mars. His sound is essentially guitar driven southern rock, but he isn’t afraid to mix in elements of the blues, swing and shuffle. In fact, fans of Jeff Healey and Gregg Allman should eat this stuff up as the three artists have similar vocal deliveries.

“Sundown And The Cowboy” has Wilson doing his Healey impression over a guitar delivery that is dripping with emotion. “Hands On The Wheel” has an Arc Angels feel while “Rocket” continues rocking with a killer guitar sound, and perhaps the best solo on the album. “The Healer” sounded like Raging Slab‘s Greg Strzempka singing along to a Foghat tune. “Slide On Over” is more of the same, gritty vocals over an unrelenting guitar.

What I found missing on an album like this was a couple songs that disintegrate into a guitar riot in their closing minutes (such as Molly Hatchet does) — it would have been nice to see what Brad is capable of when he lets loose and wanders. But there is no denying his guitar ability, and he has a voice made for bluesy rock such as this. Brad Wilson can be found at bradwilsonlive.com.