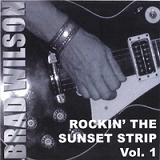 Review:
I honestly don’t know anything about this album, aside from the fact that Brad Wilson plays all the guitars. Brad Wilson is a blues guitarist that honed his skills on the Sunset Strip with such bands as Mystery City, Blind Date and Shame (according to bios that came with his press release). So I am assuming this is a collection of songs from his hair days, and I don’t think anything has been re-recorded.

The only song I recognize is the bluesy (and thus out-of-place here) “Knights Bridge” from Stone‘s Somewhere In L.A. release. The rest of the stuff here I’ve never heard before but you can tell it is straight from the decadent 80s Strip scene. The music is good, reminding me of Hericane Alice or a heavier Flame, but the songs are usually only as good as the vocalist singing them (sometimes a female).

“Walk The Streets”, “We Could Be Lovers”, “Boogie Woogie Bop” and “Madhouse” all work because the singer has a sleazy quality about him. However the female vocals on “Silence” don’t do much for me and neither does the whiney ballad “Peace Can’t Find You”. For the most part though this disc rocks, whoever the bands are that recorded these tunes should have easily got a deal at a time when labels were signing almost anyone. Plus Brad Wilson is a hell of a guitarist, it doesn’t matter if he is strumming dirty hair metal or straight up blues.

It would ease my curiosity if I knew who was performing each of these tracks, but I guess it doesn’t really matter – it is the music that counts. Brad has released five different volumes of Rockin’ The Sunset Strip and I wonder if the rest are as good or not?