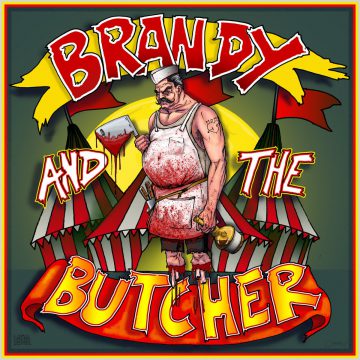 BRANDY AND THE BUTCHER
DICK CIRCUS
To be released on August 21, 2020 (River Monster Records)

Review:
When the nearest large city to you happens to be Augusta, Georgia – a city that despite being the second largest in the state also happens to have a cultural background the equivalent of some small towns – it’s not that unusual to look to places like Atlanta, Georgia or Columbia, South Carolina to get away for some big city fun. While Columbia might be smaller than “Hot-lanta”, it is also far-less cluttered as far as traffic and construction and takes over half the time to travel to all the while having just as cool local restaurants and coffee shops not to mention great record and thrift stores. Perhaps even better is the great amount of music venues and bands complete with way more parking. Over the years, Columbia has become our go-to for a day and night of adventure, even more so since we moved a good 20 miles closer to Aiken, South Carolina making it even easier to hook up with musician friends from local and visiting bands when they pop in to rock a stage including Columbia’s own sleazy, punky rockers Brandy and The Butcher.

Formed in 2018 by guitarist and Jam Room Recording Studio owner Jay Matheson and recently retired from the Army long-time drummer pal Kevin Brewer, Brandy and The Butcher are a full on dirty, raw Sex Pistols / Runaways inspired rawk and roll quartet. Brandy and The Butcher also feature ex-Army bassist Roger Shattuck, and the far from shy Elizabeth Hale who commands center stage after wielding an iron fist in her previous role as the owner of a strip club. Yeah, I know, that might be a ton to take in all at once but it’s that mix of attention to rock and roll detail and attitude that make Brandy and The Butcher tick, and it’s evident in droves on the band’s latest release Dick Circus.

As he has done on scores of releases by notable bands like Kylesa, The Queers, Black Tusk, Baroness, and his own band’s previous singles and EP, Matheson engineered Brandy and The Butcher‘s debut full length record at the Jam Room bringing that same raw sound that has garnered the studio tons of praise for over 30 years now. The result is an energetic, aggressive mix that lands somewhere in sound between The Runaways, ’90s New York acts like D Generation and The Star Spangles, and even raw across the pond sleaze rock bands Backyard Babies and The Hellacopters. Effective enough that you can almost smell the sweaty, smokey atmosphere and taste the dollar special genuine draft.

Despite possible influential claims to the contrary, Dick Circus power chords off the firing line more rawk and roll than punk even if the latter is clearly along for the ride. If you think for a second that first track “Ballerina” is even a smidge soft and tender, well get ready for a rude cowbell, Grand Funk power chord of a reality check before the whole mess plows in just in time for Hale‘s snarky vocals. Hopefully you’re more attracted to chunky grooves because pretty you ain’t gonna find, but what Brandy and The Butcher does deliver is something akin to an early KISS, New York Dolls, Joan Jett love child complete with amped up Chuck Berry style guitars and Johnny Thunders attitude. Same vitamins Hanoi Rocks and those Backyard Babies grew up strong on except for Brandy and The Butcher do so not just on this side of the water, but down deep in the dirty south.

Speaking of Backyard Babies, Dick Circus is loaded with pedal to the metal raw punky rock anthems like “Pool Party”, which comes off like Dregen and the boys backing Cherie Currie at pool side with cannonball pool crowd donned in dirty cutoff denims and a few trucker hats. The pumped up Dolls-esque title track is action packed attitude with a couple capital A’s and my personal fave “Monkey The Cat” is a sexy cranker of a tune that begs for a whole lot of jumping around stage front. If the full on frontal rawk and roll assault is something you can’t get too much of, never fear there’s still speedy tunes like”Watch Me Go” and “Technicolor Mandy” to slam to. If it’s one thing Brandy and The Butcher ain’t short on, its high volume, high voltage rock and roll and even plug in extra on the “slower” groove tunes. As you can see, I use the term “slower” loosely as you won’t find anything on Dick Circus that resembles a ballad. Well, unless getting smacked full on across the tail is your idea of love.

As much as I love the high intensity, ‘run you over’ raw side of Brandy and The Butcher, I’ve got to admit that I get a guilty groove pleasure from ass shakin’ rockers like “Makin The Scene”, which makes me feel like I’m tripping on a cross of Big Star and the Dolls, and classic rock sounding “Earthquake” especially with the killer fuzzy guitar solo. And if I need just a nod on the energy dial, there’s always the air guitar coolness of “Broken Bones” with just as much ass as action and I think most will agree, that’s a great thing!

Despite this whole pandemic pause, rock and roll in 2020 has gotten a shot in the arm at least by the way of bands on live break filling their time with great new recorded material and Brandy and The Butcher are no different. This is great summer rock and roll that this year is only missing a crowd whether it be a sweaty bar or outdoor festival. Having seen Brandy and The Butcher live, I’m familiar with how well their punky rawk anthems work in that sort of setting but I’ve got to admit, even cruising down the road in the car, Dick Circus is one hell of a listen. An awesome mix of ’70s rock and punk charged with a blast of late ’60s dirty electric guitar and a sly bit of camp tossed in just enough to tease things up a bit. If you’re looking for polished, shiny rock and roll, this isn’t it. But if you like your rock and roll with a side of PBR and a dirty well-used grease wash, Brandy and The Butcher have got your ticket to the Dick Circus.

Brandy and The Butcher‘s LP Promo:

Brandy and the Butcher LP Promo

This is a snippet from the 1st Single for out upcoming 12″LP. It’s available for resale on bandcamp.https://brandyandthebutcher.bandcamp.com/album/dick-circu…