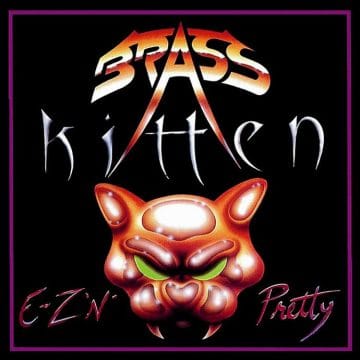 Review:
Wow! What a great debut album. I wasn’t familiar with Brass Kitten before Demon Doll Records decided to reissue the band’s debut album E-Z ‘N’ Pretty, which was first released way back in 1990 but I am glad that this great debut is getting the chance to be appreciated once again.

From my internet research, Brass Kitten first formed back in 1988 and toured extensively from 1989 to 1992 throughout Canada and the USA. In 1992, the group had finished recording its second album but bassist Kellie Roulette was involved in a serious motor accident, which halted the band’s plans. Although bassist Kiar filled in for him, Brass Kitten disbanded soon after given that Roulette‘s recovery was doubtful. The good news is that Roulette did eventually recover and Brass Kitten‘s second album Across America was eventually released in 2002.

There is no question about which era that Brass Kitten‘s debut album E-Z ‘N’ Pretty belongs to. The sounds are from the late ’80s / early ’90s hair metal era. I know some people hate the term “hair metal” but most people know which era that we are talking about when the two words are coined together. Big hair, great hooks, guys wearing tons of make-up and sometimes looking prettier than your girlfriend, and platinum selling records (for some only) are just some of the trademarks of the hair metal period. Brass Kitten definitely deliver when it comes to providing catchy hook filled songs with tons of melodies. They have so much of it on their debut album that even my wife (who at best dislikes heavy metal) was enjoying Brass Kitten‘s songs when I played it in our “family vehicle.” The big standout on E-Z ‘N’ Pretty is easily singer Steve Philbrook who has an amazing voice and quite the range, which is on full display during opening track “On The Run.” Just when you think that Philbrook has hit the highest note that he can sing, he brings it up a notch culminating during the chorus portion of the song. I could listen to Philbrook sing all day long.

What’s a hair metal album without some great guitar playing? It’s probably not a true hair metal album but don’t fret as guitarist Johnny Jeremi has the chops to shred with the best and can go over the top just like Vinnie Vincent did on Vinnie Vincent Invasion (such as for portions of “E-Z ‘N’ Pretty” and the solo on “Only One”). However, for the most part, Jeremi holds back and simply delivers solid guitar riffs that put the songs first such as on “Lies” and “Only One.” Surprise, surprise — there are a couple of ballads on E-Z ‘N’ Pretty in “Don’t Ask Me Why” and “I’ve Got A Feeling.” Those are likely the two weakest tracks on the album. That being said, they’re not bad songs. My favorites on E-Z ‘N’ Pretty are the title track with the Vinnie Vincent like shredding, the melody filled opener “On The Run”, the likely hit single “Sweet Sister Suite” and the cheeky “Big Fat Blondes” (which might be where Steel Panther got some of the blueprints for what they do).

The one drawback with Brass Kitten‘s debut album E-Z ‘N’ Pretty, and even if it has been reissued by Demon Doll Records, is that the production sounds dated. But at the same time, that is part of the record’s charm as you are taken back to that very era. It reminds me quite a bit of the sound of an older Stryper album especially with all the high notes that Philbrook regularly hits. Keep in mind that E-Z ‘N’ Pretty was Brass Kitten‘s debut album so might well have been done on a shoestring budget.

If you are longing for the hair metal sounds of the late ’80s / early ’90s, Brass Kitten‘s E-Z ‘N’ Pretty will fill that need and more. The album has everything that was right about the hair metal period all rolled into one killer record. You can pick up the album directly from Demon Doll Records.