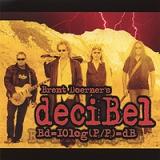 Review:
I first heard Brent Doerner sing on Helix‘s 30th Anniversary Concert DVD and immediately liked his voice. He brought a gruff bluesy quality to the songs “Crazy Women” and “Billy Oxygen” and damn near went on to steal the show. I don’t think Brent really wanted to be a frontman (he is better known for his blistering fretwork) but that is exactly what he is on his latest project.

Whereas Helix‘s Brian Vollmer comes across as a jester for all seasons on the big stage, Brent Doerner is more like the artist sweating blood in the dark corner of a dingy smoke-filled bar. There is nothing flashy about Brent Doerner’s Decibel, it is just a group of musicians playing straight-forward “blue collar rock”, although it does take a few strange twists and turns along the way.

The music contained on this CD is a type of dark, stripped-down barroom boogie – a combination of blues, country and rock. I like the slide guitar of “Takin The Color Outta Da Blooze” while “On Bended Knee” almost sounds like the type of song you would have heard on Coverdale/Page. “Fire In The Bedroom” works with its heavy toe-tapping groove and “Breathe My Name” takes the same approach to even loftier heights.

Even though Brent Doerner’s Decibel stays true to the roots of rock, it has its eclectic moments – far removed from what Helix fans will remember him for. Personally I wish Brent would have been flashier, this is after all the man that played a part in one of my favorite riffs, that of “No Rest For The Wicked”. But I can tell that this band, with its three guitar attack, would be lots of fun in a small bar on a Saturday night.