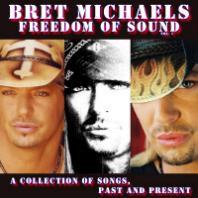 Review:
Bret Michaels, a member of the notorious rock band Poison, took on another project with Freedom Of Sound. The album has a mix of everything from rock and roll, Poison hits and new songs that were written for this album. The new songs are different and not like any of his other work. Freedom Of Sound is just as the title says, a freedom to put country lyrics together with a rock and roll sound.

The first few songs have a country sound. “Rock ‘N My Country” is definitely a unique tune with lots of catchy lyrics and a sound that you can’t put in the category of just rock or just country. The song could be heard on any radio station today.

This album is a great compilation of what Bret Michaels can do. He isn’t tied to just one type of music, he has expanded and successfully crossed over into other genres and does quiet well with them.

Bonuses on the album are songs from his previous solo albums; Letter From Death Row, Songs Of Life, the Country Demos, and the Poison album Ballads, Blues and Stories; all of which play an equally important part of his career and his life. The album is a great collection of songs that represent life and what is important to him as an artist.