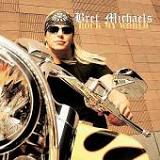 Review:
First off, I have to admit I am a HUGE fan of Bret Michaels and Poison. My collection is enormous, if it involves any member, past or present, I buy it. I am also one of the few fans who will admit when either Bret or the band does something that sucks, like when Bret released his own tribute to Poison in 2000… WTF!? While that CD had some cool versions of different Poison songs, I don’t think a tribute album should feature their front-man on all the tracks in any capacity. I’m also one of the few fans that is sick and tired of the nostalgia trip – same tour, some re-hashed ‘Best Of’, an album of cover tunes (although Poison’d did have its moments) or Live DVD. I think Bret needs to take a year off from the solo band and get the other guys in a studio, take their time (we don’t want something rushed with shitty production, we got that with Hollyweird) and hammer out an all-new studio album. Hell, hire Don Was to produce it, he did a stellar job with Poison’d. Off my soapbox and onto my review…

The new release from Bret Michaels is being advertised as his new solo album when in fact it is a solo ‘Best Of’ with three ‘new’ tracks thrown in the mix. He did the same thing on Freedom Of Sound, it featured nine new tracks (including a country remake of “Every Rose Has Its Thorn”) and then an extra nine songs from his previous solo releases. The ‘new’ tracks on Rock My World have been available for a while through iTunes and Bret’s Fan Club. Initially this release was supposed to be an all-new solo album entitled Custom Built, however someone made the decision to release this instead. This is an obvious attempt to quickly cash in on the huge success that is Bret‘s reality show Rock Of Love, right down to the title of the album. While I would have rather seen an all new album as I own all this material already, it is a nice compilation for the completists and a great introduction to Bret‘s solo music for those who have been living under a rock for the past ten years and were unaware that he had been recording music (and has also written, starred in and directed several movies) outside of Poison. My only gripe about this release is that it doesn’t include anything from his real debut solo album/soundtrack for A Letter From Death Row. While that CD ran the gamut of musical styles, this release is a more cohesive offering – although I could see a “Party Rock Band” or “Times Like These” from that album or “Walk Away” (from Ballads, Blues & Stories) fitting into this collection rather nicely.

The album kicks of with the Rock Of Love theme song and first single/video “Go That Far”. This song is full of cliched lyrics and borrowed song titles for which Bret has become all-to-accustomed in writing over the past few years, but with that being said the song does get the disc off to a rockin’ start. “Driven” features Bret‘s southern rock/outlaw country influence chocked full of sexual innuendoes that one would expect from him. “Fallen” is a beautiful piano driven ballad about a love that nobody seems to agree with but Bret, it also showcases some really nice acoustic fretwork. “Raine” is probably the most heartfelt song Bret Michaels has ever written as it is a piece written for his first daughter and probably the most well-known song on this album (it was released as a single/video back in 2003).

“Bittersweet” is my favorite track on Rock My World, it is a straight-ahead rocker from the point-of-view of someone who lost love to their best friend, however, karma comes back to bite the former friend in the ass when the ‘love’ runs off with one of his friends in the end. “Start Again” is another track showcasing more of Bret‘s southern rock/outlaw country influence, but there is nothing spectacular within this track. “Songs Of Life” is the title track of Bret‘s 2003 release and one of the better lyrics he has ever written away from Poison, it’s a mid-tempo song about the obstacles we all face in life. I’d like to see this track made into a video and released as a single.

“Strange Sensation” kicks off the second half of the album with a balls-to-the-wall rocker about the love/hate aspects of a relationship. “All I Ever Needed” is a heartfelt country-esque ballad from his 2005 release that was released as a single/video, it features some amazing ‘background’ vocals from country singer Jessica Andrews. “Menace To Society” is a song everyone can relate to, a blazing middle finger salute to those who always seem to try and keep ya down, complete with a gang chorus about RAISING HELL, who couldn’t relate?!?! The solo sounds like a C.C. DeVille creation so this should appeal to the Poison fans. “Right Now, Right Here” kicks off with a down-tuned chugging riff than fades into a mid-tempo verse before kicking back in full-throttle at the choruses and is one of the more interesting songs Bret Michaels has ever written musically. Many people, myself included, bag on Bret for re-hashing the same subjects over and over, but I’ve come to realize that he is one of the best at what he does, as most of his songs do seem to hit some sort of nerve and gives me a deja-vu feeling. That is what a good songwriter does, strikes a chord with their listener.

With that being said, thankfully we are spared from hearing a redo of “Every Rose Has Its Thorn” or being subjected to one of Bret‘s favorite lines for a song, ‘Famous Final Scene’, which I can think of 3-4 songs he has used that line in over the years. The album comes to a close with a roof-raising rocker entitled “It’s My Party (2008 Mix)”. This track was originally from Songs Of Life and I don’t see any difference in either mix, probably something so subtle I need headphones to catch it. The guitars are detuned and distorted adding almost a grungy feel to this sexually charged party anthem complete with “Woohoo” background vocals and lyrics about fast cars and firing up the ganja – a fitting end to this compilation showcasing Bret‘s solo career up until now. I highly recommend if you dig this collection that you check out his other solo releases, A Letter From Death Row, Ballads, Blues & Stories, Songs Of Life, Freedom Of Sound, and for a real kick, grab yourself a copy of his Country Demos recorded back in 1995/1996 while living in Nashville, TN.