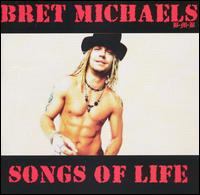 Review:
Poison front man Bret Michaels releases another solo album that manages to impress longtime fans while opening up lyrically. Standout songs such as “Menace To Society”, “Loaded Gun” and “It’s My Party” are up-tempo, while slower paced numbers “Forgiveness” and “One More Day” are a nice addition. The debut single “Raine”, a heartfelt ballad, is a touching tribute to his daughter.

The album also includes a video for the song “Raine”. The sound here is like a more mature Poison, as Michaels explores his bluesy roots while delving deeply into events throughout his life. Bret Michaels does a good job here, and really gives fans a look inside his life, and for that I give the album two thumbs up!