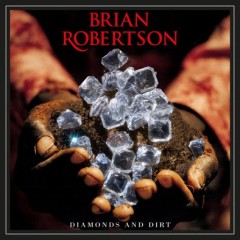 Review:
Brian Robertson‘s Diamonds And Dirt has been decades in the making… or so it seems, given that there have been plenty of opportunities in the past to come up with a solo album. It’s hard to believe that Robertson hasn’t issued a solo album until now — since his departure from Thin Lizzy, or after Wild Horses disbanded, or even after he was axed from Motorhead.

On Diamonds And Dirt ‘Robbo‘ is joined by vocalist Leif Sundin (Michael Schenker Group), Liny Wood, drummer Ian Haugland (Europe) and bassist Nalley Pahlsson (Treat). Armed with a handful of originals and covers, ‘Robbo‘ and company went into the studio and the result is a mesh of road house, British blues, and classic rock fury. Included in the song selection are the three Frankie Miller penned tracks, “Mail Box”, “Do It Till We Drop (Drop It)” and “Ain’t Got No Money”. The highlights of Diamonds And Dirt include the unreleased Brian Robertson and Phil Lynott composition “Blues Boy” and the reworking of the Thin Lizzy classic “Running Back” from their breakthrough album Jailbeak. “Running Back” actually appears here in two versions, and surprisingly the slow version is much better. “10 Miles To Go On A 9 Mile Road,” and the aforementioned “Mail Box” round out the best songs on this CD.

‘Robbo‘ isn’t exactly known for having a signature tone like Billy Gibbons, Jimi Hendrix or Stevie Ray Vaughan, but he has grown as a guitarist and plays with the urgency of a hungry musician duking it out in the clubs.

Diamonds And Dirt was too long in the making, so let’s keep our fingers crossed that there will be some more new music sooner rather than later. In short, ‘Robbo‘ didn’t stray too far away from what he knows, and from what fans expect of him. Diamonds And Dirt should receive a good reception and will open some new doors for this classic rocker.