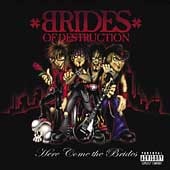 Review:
When Tracii Guns quit L.A. Guns in a jealous rage after the Rockfest tour with Dokken, Firehouse, Warrant, and Ratt in 2002, I was pretty annoyed with him. The man has consistently tried to find a better gig than L.A. Guns, even trying out for Limp Bizkit, which is a crime punishable by death in my opinion. But, when I heard he was with Nikki Sixx, I was happy! Motley Crue is one of my favorite bands and this could have been the combination of two of the best hard rock bands ever releasing an album that would turn the metal world on it’s ear.

It could have been. It isn’t.

I’m very disappointed in this record. I expected a really good record with strong melodies, great musicianship, and still enough attitude to make you want to go beat up some poser rap rock band upon sight. This album does not have all that great of melodies, fair musicianship, and leaves you with the feeling “I want to like it but I just can’t sink my teeth in.”

“Shut The Fuck Up” is a cool song to start out with. I cringe at the lyrics mostly because the musical bar has been lowered to such a degree that any uneducated person can release a rap CD saying that word 50 times and they’ll make more than 50 cents. But I do like the song and I also like most of the songs to an extent, just not as much as I thought I would. My expectations were probably too high.

“Natural Born Killers”, “I Got A Gun”, “Revolution”, and “Only Get So Far” are my favorite tunes off the album. None are of Guns or Motley quality, but they’re still cool. I’d say they’re more Guns than Motley, if I were to classify.

This, at best, average record mixed with Nikki refusing to join the Poison/Kiss tour this summer makes me rather disenfranchised with the whole band. Nikki said the Brides, or anything Motley, will not be associated with a band like Poison. Does Nikki not know that Tracii joined Poison for about 30 seconds a few years ago during one of the bands spats with C.C. DeVille? How about former Motley Crue drummer Randy Castillo performing on Poison vocalist Bret Michaels‘ solo record A Letter From Death Row? But if you need the best proof of all that Nikki‘s new found “attitude” is stupidity, take a gander at last year’s Poison tour. Opening act? Motley Crue vocalist Vince Neil. So, enjoy playing Tootsie’s Bar ‘n’ Grill, Nikki. Poison/Kiss will fill venues ten times as big.

Now, don’t get me wrong. I don’t hate the band or the record. I just get real mad when I look forward to something and it lets me down. And, Nikki has let me down by taking a stand against a band on par with Motley Crue. Will I show up at Tootsie’s Bar ‘n’ Grill? Sure, I do like the album a little and Tracii is always fun to see in concert. But, do I think Nikki‘s driving the band into the ground? Absolutely.

Why have Tracii and Nikki changed their style from melodic hard rock to poorly produced punkish rock? Maybe, as Nikki seems to be, they are ashamed to have been in a hair band. Another hair band, Tesla, released an album the same day as Brides did and are not ashamed of who they were or what they are. That record sold twice as many copies as this one. Can you say Rock ‘n’ Roll Justice? I can!

I give this record 2 of 5 stars. Biggest disappointment of 2004.

Review:
Proclaiming to have returned with “snotty, raw rock ‘n’ roll”, two of the bigger names in 80’s metal have once again penetrated the mainstream with the Brides Of Destruction. Motley Crue‘s Nikki Sixx and L.A. Guns‘ Tracii Guns have recruited a couple of unknowns to play sleazy hard rock, similar in look and style to the sadly ignored Beautiful Creatures.

Fans looking for a rehash of old Crue and Guns tunes should look elsewhere as Here Come The Brides has more in common with the new breed of sleaze then the old school. Standout tracks include “I Don’t Care” which has the typical punk overtones, “Natural Born Killers” an up-tempo rocker, the melodic sing-a-long “Life” and “Only Get So Far” (the closest the band comes to a ballad). While the entire band delivers on Here Comes The Brides, it is actually vocalist LeGrand that impresses me the most. He has the perfect delivery for music like this, when it isn’t layered with vocal effects.

For some reason “Shut The Fuck Up” was chosen as the first single, despite it being one of the weaker tracks — unconvincing in it’s attempt at anarchy (“Revolution”, a similar type song, is far more satisfying). All in all this is a pretty good debut album — although I must admit that I prefer the Beautiful Creatures — and it is great to see uncompromising rock attempting to kick in the mainstream’s door again. The band’s website is located at bridesofdestruction.com.