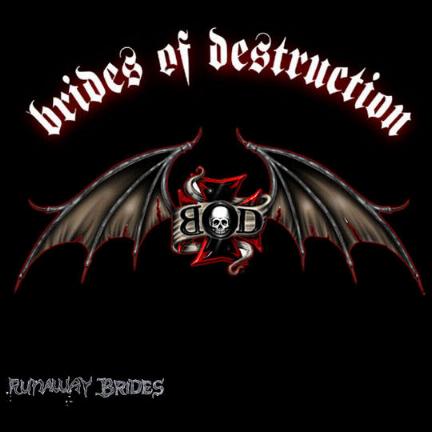 Review:
The Brides Of Destruction are back without Nikki Sixx, who left for the more lucrative Motley Crue reunion. But his departure doesn’t seem to have stifled the band’s creativity in the least, in fact the Brides seem more diversified then ever and have included five more tunes then appeared on the debut. I guess Nikki wasn’t that important after-all.

I have to say that I am enjoying this release much more then the debut. I found the debut to be hit and miss, and even though Runaway Brides is as well, it has far more satisfying moments. Take for instance “Lord Of The Mind”, a song that sounds a lot like Monster Magnet – or even the machine gun beat of “Dead Man’s Ruin”, too bad the vocal effects take away from the song’s momentum. Oddly enough the disc doesn’t really gain steam until the second half with the lead single “White Trash”, a rollicking upbeat number with a chorus catchier then anything on the debut.

“Never Say Never” is a cool retro song that slows things down until reaching the chorus where London LeGrand screams for all he is worth. I know I was one of the few that liked his voice on the debut, but on Runaway Brides he sounds better then ever – more confident and with more range. “Blown Away” contains some of Tracii Guns‘ fastest riffs ever, although the “whoa oh” chants leave something to be desired. “Tunnel Of Love” is the best song on the disc, and would have been my choice for the first single. It sounds identical to classic 70s Aerosmith and you’d swear Steven Tyler was flapping his huge lips during the chorus…great stuff.

Tracii Guns sounds like he has got his second wind on this release, playing some of his most inspired music in ages (check out the groove he lays down on “Porcelain Queen”), couple that with LeGrand‘s maturity and the Brides Of Destruction seem to finally be coming into their own. They still haven’t made a perfect album, but this is a hell of a lot more enjoyable then Here Come The Brides. Maybe the third time will be a charm? But until then, this release will do just fine – more information can be found at bridesofdestruction.com.