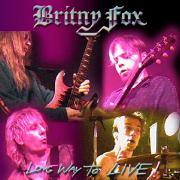 Review:
Britny Fox has long been known as one of the many “hair bands” of the 1980’s metal scene. But unlike a lot of the other “hair bands,” which is a phrase I absolutely hate, Britny Fox never had a top smashing ballad or an inescapable tune that consumed you no matter where you turned. Britny Fox was not a monstrous hair band, but this album makes me wonder just why not.

Sadly, my years on this Earth are too few to really recall the wonder that was the 80’s as well as I’d like to. But this album really does rock like no band today can. I like music that’s a tad old for my age, but I like music that rocks appropriately and doesn’t treat the fans like we’re stupid. I like rock and roll that makes me feel good about me and forget all the down sounding moans of the grunge genre. I am, as Manowar would say, a brother of true Metal and this album is true Metal if you ask me.

From the first track “Six Guns Loaded,” the blazing sound of extremely powerful vocals and a blazing guitar really consumes you and fills you with energy. At no point in the album does that energy leave you and all the great Britny Fox classics like “Girlschool”, “Long way To Love”, “Dream On”, and “Lonely Too Long” are all on there and I assure you that if you thought the studio version of these songs were head banging tunes, you have to hear how they sound live because it’s twice as powerful and twice as good.

Sure, Britny Fox may not be a household name and maybe they never were as big as Poison or Bon Jovi, but they rock just as hard and just as long, and I, the owner of a Heavy Metal website, am proud to promote Britny Fox as one of my favorite bands and this as one of my favorite albums. If you like rock, metal, or are just looking to sample some good music, this is the one for you.