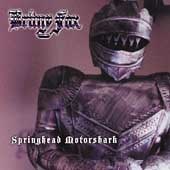 Review:
The second lineup of Britny Fox has returned with their first batch of new material in over twelve years, and upon first listen I was disappointed. But don’t stop reading there; cause Springhead Motorshark has grown on me like a bad case of poison oak. This disc doesn’t rock out as much Bite Down Hard, but is much more experimental and melodic.

The aggressive “Pain” starts the disc off on the right foot, but it is the next few tunes that make the album. “Freaktown” has a galloping guitar pattern and harmonic chorus, “T.L.U.C. (For You)” confirms that Michael Kelly Smith still has his guitar prowess and “LA” is a nice mellow song. The acoustic “Is It Real?” could be the best song on the disc, it is irresistible, and chances are you won’t be able to stop yourself from singing along.

The last half of the disc tends to be on the mellow side, and may disappoint longtime fans. The album finishes up with the nine plus minutes of “Sri Lanka”, which sounds like something Bonham would have written, and in no way fits the typical Britny Fox mold. All in all there is enough here (including three videos of classic tunes) to please the hardcore audience, and although it doesn’t quite measure up to Britny Fox‘s best work, is worth a listen.