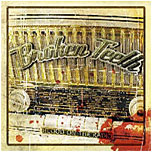 Review:
When it comes to live albums I can take ’em or leave ’em, and with only two studio releases under their belts I’m really not sure if a live CD from Broken Teeth is necessary. But Blood On The Radio has been delivered, so regardless of whether it was needed or not how does it sound? It sounds great, as Broken Teeth prove that they can deliver onstage as well as they do on album. The hometown Austin, Texas crowd is surprisingly mellow though – I would have pictured the crowd to be severely drunk and screaming for more.

For people that haven’t heard Broken teeth before I always say they are the best AC/DC clone this side of Dirty Looks – which is hardly surprising since former Dirty Looks guitarist Paul Lidel continues to unleashed his three-chord boogie here. Ex-Dangerous Toys front-man Jason McMaster continues to employ his screeching, guttural growl with this band – rarely does his delivery disappoint.

The first three songs on Blood On The Radio explode with the same urgency they had on the studio albums, oozing with sleaze and attitude. This is what hard rock is all about folks. Everything here is full of swagger and piss and vinegar, a kind of barroom boogie that is all to lost in today’s musical climate. You have to love McMaster‘s tangent on “Shangrila” that is reminiscent of Steve Whiteman. The only new song on this release is “Bonfire” which has back up vocals similar to those on “Dirty Deeds Done Dirt Cheap” – it fits like a glove among the others songs.

These songs are pretty close to the originals, which makes sense seeing as the original production was as raw as the music. It isn’t new and it isn’t innovative – but it kicks ass, and that is all that concerns me. If this music doesn’t get you head-banging you may as well put your neck in a brace and curl up and die. This is another quality release from Broken Teeth and Perris Records.