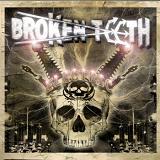 Review:
I’ve had Broken Teeth‘s latest CD Electric for months now, but didn’t think there was much sense in reviewing it until you, the listener, was able to purchase it. And to be honest, I still don’t fully understand this release. It contains 5 completely new tracks, a studio version of “Bonfire” and 6 songs from the band’s first two CDs, but these tracks have all been re-recorded and re-vamped!

The differences on the re-recorded tracks are very subtle, at times hardly noticeable (unless you’ve spun those early discs as much as I have). I wonder if Broken Teeth decided to give their classics another go to introduce the new guitar player? Or maybe the band just feels that during the years since their initial release they have fine-tuned them? I’m not sure what the answer is, but it turns Electric into a sort of greatest hits compilation disc.

Luckily the new songs are great, pure Broken Teeth. Former Dangerous Toys screamer Jason McMaster still sings as if he hates his voice, using a delivery that would shred the vocal chords of mere mortals. To be honest, I was a bit worried that the departure of Paul Lidel (who is concentrating on Adrenaline Factor and the reunited Dirty Looks) would remove some of the heart and soul from Broken Teeth. However his absence doesn’t seem to have affected the band at all as their new compositions are more AC/DC inspired fury.

If you’ve loved Broken Teeth‘s earlier work then Electric will be a must have for you, as “Roll Over”, “Electric”, “Blood On The Radio” and “Hell For Sale” are pure adrenaline and attitude driven rock songs. Jason McMaster and company have delivered another killer disc, even if I don’t fully understand the reasoning behind it.