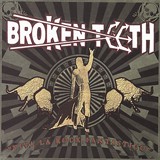 Review:
A new recording from Jason McMaster is almost always cause for celebration. First bursting upon the scene with Watchtower and then hitting his stride with Dangerous Toys, ‘Pastor’ McMaster has been a true rock workhorse, seemingly putting recording and touring before even breathing and eating. Viva La Rock, Fantastico! is the latest from McMaster‘s AC/DC influenced concoction known as Broken Teeth, a band that is as abrasive as their name suggests.

As always, McMaster‘s voice is at its screeching best. Love-it or hate-it, this is the voice of deliciously sleazy hard rock. It is a voice that slices through your skin with the precision of a razor-sharp blade before reaching inside, grabbing hold of your spinal cord, and shaking the shit right out of it. That’s what it, and Broken Teeth, do to me anyway — the music hits so hard that it sends a shiver right down my spine. This doesn’t happen often, but when it does you know you’ve stumbled upon musical perfection.

Hit random on the CD player, close your eyes, and a gem is going to start up. From beginning to end Viva La Rock, Fantastico! hits hard, mixing the snotty-nosed attitude of Dangerous Toys‘ underrated Pissed with a furious rendition of AC/DC‘s three chord boogie. It makes for a great combination on every song, but especially “Blackheart”, “Exploder”, “Bullet”, “Ride Upon Glory” and the title-track. The CD creates an image of ‘Pastor’ McMaster standing behind his podium, with lightning and crimson skies in the background, while his loyal subjects bang their heads in agreement and endlessly scream for more.

There is a line in the opening song that really sums up Viva La Rock, Fantastico! as a whole, “If you like it loud, loud is what we’re feeding”. Broken Teeth have been around for a decade now, but they sound as fresh today as they did when they stormed upon the hard rock scene. What a way to ring in the New Year!