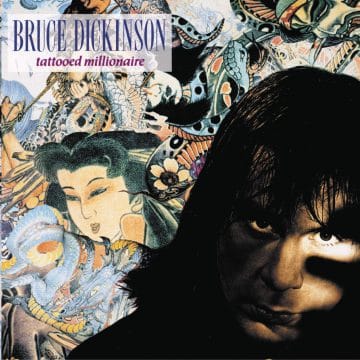 Review:
Iron Maiden frontman Bruce Dickinson set out on his own and issued his debut solo album Tattooed Millionaire in 1990. He was still a member of Maiden at the time, but we got a taste of what Bruce could do as a solo artist, when he recorded a track for the A Nightmare On Elm Street 5: Dream Child. The song was “Bring Your Daughter …To The Slaughter.” It was not the most creative thing that he’s been a part of as it was pedestrian and it featured a repetitive chorus that was inescapable, no matter how much you despised it. As horrific as that tune was, it didn’t make the Tattooed Millionaire album, but did make the next Maiden record No Prayer For The Dying. The following Maiden record — 1992’s Fear of The Dark — marked Dickinson’s farewell album with Maiden, which was then followed by an extensive world tour.

Tattooed Millionaire unofficially kicked off Dickinson’s solo career. It was well received by the press. The title track was in regular rotation on the music video channels as was his cover of Mott The Hoople’s “All The Young Dudes.” Solo albums should be a slight departure from what artists do in their full-time gigs and Tattooed Millionaire was that. There were no ‘epic’ or ‘cerebral’ songs. In fact, the majority of the material was mindless, simple, cheesy, melodic and catchy. You hear evidence of this on the songs “Hell On Wheels,” “Dive! Dive! Dive!,” “Lickin’ The Gun,” “Zulu Lulu,” and “No Lies.” Tattooed Millionaire brought in some fans that might not have otherwise listened to Iron Maiden due to their lengthy, at times ‘historically’ based songs, that were frankly not for everyone. At the time, there were Maiden fans who were up in arms at what Bruce had done! There was some saving grace in their eyes, namely the title track where Bruce blasts the L.A. Glam scene and points the finger at one person in particular, but who was it? Was it Axl Rose or was it Nikki Sixx? The latter claimed to have ‘shagged’ Bruce’s then wife, when Mötley Crüe were on tour in Europe during their Shout At The Devil tour. The adulterous acts allegedly took place when both bands happened to be in the same hotel! Scandalous. The other stronger songs on Tattooed Millionaire were “Born In ‘58” which appeared to be an autobiographical song about Dickinson’s upbringing and of course the cover of “All The Young Dudes.”

Tattooed Millionaire featured Janick Gers on lead guitar who had been a member of Ian Gillan’s (Deep Purple) solo band and as you know after this album, Gers went on to join Iron Maiden, where he has remained to this day. Janick Gers also served as co-writer to all the original material that was recorded on this album. Dickinson was quick to judge 80s Glam bands, yet he went really melodic on this one and it was really akin to the music of the time. This was the first of many solo records and it was not the first time Dickinson jumped on trends. ‘Tattooed Millionaire’ has its moments mostly the title track, “All The Young Dudes” and “Born In ‘58,” you can certainly go on with anything else on this album.

Reviewed by Ruben Mosqueda for Sleaze Roxx, May 2020