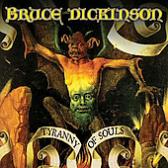 Review:
Any heavy metal fan that doesn’t know about Bruce Dickinson and his band Iron Maiden has obviously spent a great deal of time under a rock. When I was in high school Maiden was one of, if not THE biggest band around. But by the early 90’s, thanks to the sub-par No Prayer For The Dying, I began to lose interest. It seemed like Maiden began sleepwalking through albums and when Bruce split for a solo career he drifted too far from his roots and released some lackluster material. For me, and several others, the metal Gods were beginning to wear out their welcome.

So on a whim, and perhaps for nostalgic reasons, I picked up Dickinson‘s Accident Of Birth in 1997 and was completely blown away. It looked like I had written Bruce off a touch too soon. Tyranny Of Souls may not reach the lofty pinnacles of Accident Of Birth, but without a doubt it is in the same league. Dickinson still has the air-raid siren vocals that will make many die-hards salivate, but I keep wondering if a dash of Adrian Smith is the one missing piece to this puzzle.

Don’t expect a classic Maiden album here, as Dickinson has moved away from the galloping bass lines that are their signature sound. Tyranny Of Souls does have its Maiden moments however like the majestic “Power Of The Sun” which would have fit comfortably on Seventh Son Of A Seventh Son, while “Abducted” is classic high energy Dickinson work. While this release does have its Maiden moments, Bruce seems to have realized that he can experiment without completely turning his back on the sound that made him famous. It is a fine line to walk, and in the past Bruce has fallen way off, but Tyranny Of Souls manages to bring in enough old and new to keep everyone happy.

Maybe I’m getting soft in my old age but I found “Navigate The Seas Of The Sun” to be a beautiful slower number and one of the best tracks. “River Of No Return” treads down the same path but isn’t quite as good, although it does implement some strange sounds. “Devil On A Hog” is another stand out track that has a Black Sabbath guitar crunch and a melodic sing-a-long chorus.

Aside from “Believil” every song here is a winner and the tunes are growing on me with each listen. Bruce Dickinson is back in fine form! This album gets released on May 24th, until then samples of each song, as well as the video for “Abducted”, can be found at www.brucedickinson.net – enjoy.