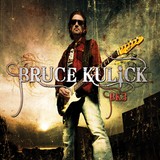 Review:
If you’re keeping count you know that this is guitarist Bruce Kulick‘s third solo effort, hence the BK3 title. Okay, it’s not the most of original of titles I know, but Bruce has always been a laid back, low-key kind of guy, so the name isn’t surprising.

From 1984 to 1996 Bruce Kulick was the lead guitarist for Kiss, and since then he’s gone on to form Union with John Corabi (formerly of Motley Crue and The Scream) who released a pair of studio albums and a live effort. Union ultimately disbanded and the axe-slinger went on to Grand Funk Railroad, where he has been since 2001. Kulick has remained inconspicuous but still active playing guitar, writing songs, touring and making special appearances on other people’s albums from time to time.

On BK3 Kulick has written and recorded his best solo record to date. The songs are well crafted, strong, memorable and catchy. While his vocals have come a long way from his singing debut on Kiss‘ “I Walk Alone”, he won’t be competing with Rob Halford, Ronnie James Dio or even Paul Stanley anytime soon. “No Friend Of Mine”, where we hear Kulick and Corabi team up once again, is one of the stand-out tracks and is close to what we might hear from the duo if Union was still active today. It’s a powerful and emotional track that will please both Union and Corabi fans. “Ain’t Gonna Die” is a song that grew on me as I didn’t love it when I first heard it. Gene Simmons is the featured singer on that track and it is a cross between Revenge and Carnival Of Souls era Kiss. I also enjoy “I’m The Animal”, which features the drumming of Eric Singer and a powerful vocal performance and chorus from Edguy and Avantasia frontman Tobias Sammet. Another noteworthy track is the instrumental “Between The Lines” where Kulick trades licks with Steve Luthaker, it’s a melodic song and not so over the top that it turns into a wankfest.

BK3 is an eclectic record as there are rockers, ballads, mid-tempo tracks and an instrumental. Bruce Kulick transformed what could have been an average effort into a very good one by scanning his rolodex and busting out a few phone calls. This album isn’t just for Kiss and Union fans, because if you like melodic hard rock then BK3 is a worthy investment.