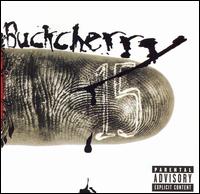 Review by James:
I like Buckcherry. I like them because they came around at a time when being a screaming rock ‘n’ roll band with energy was not exactly “cool” in the media contrived music world. In other words, Buckcherry bucked the system. And with melodic songs like “Lit Up”, it was a natural they’d stand out as a musical force.

After a hiatus caused by the band splitting in 2002, they’ve returned in 2006 to release their third album titled 15, and it certainly is an interesting bag of tricks.

Their debut album was very melodic with Josh‘s voice and guitar hooks being what took the album to the heights it did. The second album titled Time Bomb had a lot heavier guitar sound which I personally enjoyed. 15 doesn’t have anywhere near that same heavy guitar. In fact, the guitar is so un-loud, if that’s a word, this could pass for classic rock and not sleaze rock.

Is that a good or a bad thing? Well, I’m torn. I think rock ‘n’ roll is rapidly approaching a major problem in that rock that actually bothers to have guitar hooks and a chorus is called “melodic rock.” Perhaps I’m old school but I thought a song involved hooks and a chorus and not having that is what you call noise. So, with everything getting so heavy and losing track of where it came from, albums like this and Warrant‘s Born Again do sort of remind people, “You can rock without just playing loud as hell.” That said, this album does not have near the energy of the band’s first two.

Josh has one of those great screamer voices. But it isn’t on display very much in this album. In fact, in songs like “Next To You”, he sings so un-metal that he almost could pass for one of the 15-year-old (pun intended) punk singers that all sound exactly the same. There is next to no reaching to hit notes or screaming except, and even this is up for debate, in the chorus.

The song I have heard a lot of hype about is called “Crazy Bitch.” Sounds like a great sleaze rocker, doesn’t it? And, it is. But the lyrics are such that it just can’t be played on radio. There’s a difference between “are you fucking high” which can be clipped for radio play and “hey, you’re a crazy bitch but you fuck so good…” Yada, yada yada. Don’t get me wrong, the song rocks hard and it’s the closest thing to the first album on this CD.

While it isn’t the single or the most popular song on the album, I think the song “Broken Glass” kicks the most ass on the record. This song picks up the pace a whole hell of a lot, it’s a shame that it’s the last track on the disc.

Don’t get me wrong… The songs are very well written and they all contain hooks and a guitar solo, so that hasn’t changed. But the sound of the album, possibly thanks to production, is way more classic rock than sleaze rock if you ask me. Perhaps that’s why the nerdy music magazine writer showed up at a Buckcherry concert recently and was shocked to hear them sounding like “an 80’s hair band.” You must remember nerds like that couldn’t get laid in the ’80’s so they hold a grudge.

Overall, I must say I like the album but I’m not as wild about it as I expected to be. Nonetheless, I give the band kudos for putting together another solid album and keeping rock ‘n’ roll alive. If you liked either of their first few albums, pick it up and notice the changes. If you are trying to discover who Buckcherry is, pick up the first one or Time Bomb. I think those two have more bite to them.

Reviewed by James for Sleaze Roxx, May 2006.

Review by Carmine Rose:
Do all you motherfuckers love the cocaine? Are you a crazy bitch? If not, you will be very soon. We last left our heroes in 2002, when they were working on a third album. According to some, Josh left the band, and everyone else followed suit, others say everyone else left, and Josh and Keith tried to hold it together. Either way, I’m not taking sides. During Buckcherry‘s hiatus, Josh Todd and Keith Nelson jammed with Slash, Duff MacKagan, and Matt Sorum, leading some to believe that Josh would end up being the lead singer in Velvet Revolver. Rumors then turned towards former Skid Row frontman Sebastian Bach, and the rest is history. Anyway, fast forward to 2005, Buckcherry returned, with different members, but still with key members Josh and Keith. The formula remains the same, but it doesn’t fail to entertain. Holy shit, I
can rhyme! Anybody got a dime? I’ll meet you at dawn, and now it’s time
to read on.

1) “So Far” I’m quite impressed, this is a fast rocker very much in the same vein as the 1999 self-titled debut, killer guitar riffs, the sleaze, everything Buckcherry lovers want! The solo shows Buckcherry in “sick mode!” The new members bring something new, that definitely rocks.
Score: 9.5/10

2) “Next To You” is a song with a sort of swingin’ but not really kind of beat, should become a favorite at all the concerts. Josh Todd sounds like he always has, Keith Nelson does what he does best, and the other dudes bring justice to the song. I love the lyrics in this “I’ve been tryin’ all night long and I wanna get next to you!”
Score: 10/10

3) This songs starts out sort of “Out Of Line”, well not really, but it has a few voice box effects, not enough to draw up a comparison to Bon Jovi. In fact this is very AC/DC, even more AC/DC style than usual for Buckcherry, if Bon Scott was singing, you’d easily think it was 1970’s AC/DC.
Score: 9/10

4) “Everything” shows them in the intro with U2-ish ringing guitars (just quoted Billboard.com there, but I agree with it so…). It’s kinda like the mellower rockers off Time Bomb, though more modern. This is as close to modern as it gets, so if this isn’t too modern for you, you should like the rest of the album.
Score: 8/10

5) “Carousel” makes me think of the movie Me, Myself & Irene for some reason, it’s a little like one of the songs from that, but not really. That sounds totally contradictory, but that’s the kinda vibe I’m getting from this. Don’t ask me why. Pretty good song by the way.
Score: 8/10

6) “Sorry” is the type of song that if Buckcherry was to have their first real hit ballad, this would be it. This song was written with Marti Frederiksen, who worked with Aerosmith quite a bit. I read a Metal Edge interview with Buckcherry not long ago, and for the first time, they had an outside writer on this album. As you know, most bands are opposed to that, and I can understand why, you’re afraid they’ll butcher up the songs, but don’t worry, Buckcherry is in good hands.
Score: 10/10

7) “Crazy Bitch” is everything a Buckcherry lover could ask for, and is also the song you’ve heard on every rock station. Exceedingly blunt in its quest to be dirty. Nice! This is not for the easily offended. But to piss ’em off, you should play it for ’em anyway. To quote Pixy 103, a popular rock station in my hometown, “Turn it up so you can’t hear ’em bitch!” The video for this is pretty bitchin’ too (no pun intended, but if you want it to be a pun, I won’t tell you what to do).
Score: 10/10

8) “Onset” is a very Time Bomb-esque rocker, fast, upbeat, kind of along the lines of “Underneath.” It has all the elements a Buckcherry fan could ask for, but without the X-ratedness of “Crazy Bitch.”
Score: 9/10

9) “Sunshine” is again, kinda Time Bomb-esque. Good time rocker. Not as hard rockin’ as “Onset”, but it has a lot of things Buckcherry fans love….don’t know what else to say…..
Score: 9/10

10) “Brooklyn” is the most bluesy song on the album, the slide guitar, the 12-bar blues form, Buckcherry at their bluesiest. I like the slide guitar. Buckcherry are very talented, this shows they can do a lot. It’s sorta bluesy country without being really “southern accent” type of country, it’s like hard rock country blues, if that makes any sense.
Score: 9/10

11) With a title like “Broken Glass”, I’m sure you know what to expect, and you get exactly what you expect. It’s heavy without crossing into metal territory. It’s still hard rock, definitely something to put the audience into a frenzy, and a great way to finish the album, that is, if you’re referring to the American release of this album.
Score: 10/10

12) “Back In The Day” has a guitar riff unexpected from Buckcherry in the beginning. It’s very……well…….Nirvana-esque. Had you going didn’t I? It’s definitely rockin’ in the neighborhood of Buckcherry, the attitude in the verses is a lot like Britny Fox‘s “Louder.” Totally a song to tap your foot and bang your head immaturely to!
Score: 9/10

13) I’m not sure who it was that originally did this, but “Pump It Up” is done pretty damn well by Buckcherry. It just shows that whether you own/buy the American release or the Japanese release, you have a well book-ended album.
Score: 9/10

Before this album came out, I thought this wouldn’t have a chance at commercial success. Was I wrong or what? The album is selling remarkably well, for an album on a small label. It debuted at #48, dropped to #67 the next week, and since then it’s been in the 50s. Lava/Atlantic just picked these guys up, so the future’s lookin’ bright for the boys. Plus I should also note that “Crazy Bitch” has charted as high as #4 on the mainstream rock charts, #27 on modern rock, #91 on the pop 100, and #99 on the Hot 100, making it their biggest hit since “Lit Up” and marking the first time Buckcherry has made a dent on the pop charts. It all seems to be in the cards. The timing is much better than before, now that Limp Bizkit and Korn‘s newest albums have experienced poor sales, and old school rock is making a comeback. It’s nice to see a sleaze band on the radio again.

Essential for fans of: Buckcherry (of course), AC/DC, The Black Crowes, Silvertide and Aerosmith.

Reviewed by Carmine Rose for Sleaze Roxx, May 2006.