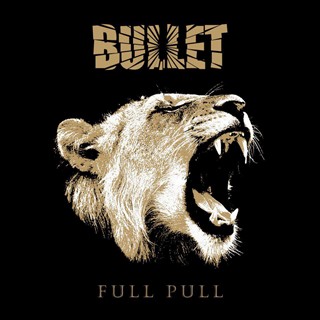 Review:
We last heard from Bullet on 2011’s Highway Pirates, and this hard working Swedish band has already released its follow-up, Full Pull, which pretty much starts where Highway Pirates left off. In fact, it would be safe to call this album ‘Highway Pirates Part II’, and that’s not a bad thing.

Bullet was given nothing and had to work their way up from obscurity to being a household name in Europe, and playing to rock festival audiences in the tens of thousands. Throughout Bullet has continued on with their unapologetic brand of a modern Accept meets AC/DC sound, including infectious power riffs and melodic hard rock. Their twin lead guitar onslaught of Hampus Klang and Erik Almstrom are comparable with metal classics such as Judas Priest and Iron Maiden. The band’s image borders on a biker gang look, which is reflected in many of their song’s lyrics, but looking at lead singer Hell Hofer can’t help but make me smile with his mop of wavy locks and facial hair. He’s almost like a Euro version of Jack Black with his purposeful stage moves and intense eyes. His voice is extremely powerful with a full throaty tenor growl that is so distinct that he cannot be mistaken for anyone else in the industry.

The band’s song writing has remained true to their roots but you can hear the maturation over the albums. Full Pull has a more polished clean sound to it, but the songs are all very straight-up hard rockers. The title track is an absolute blistering composition, and about what you’d expect from a faster paced Bullet song. Other full-on pummeling songs include “Gutterview” and “Rush Hour”, while the band ventures into unchartered territory for themselves by adding a piano at the end of “Rolling Home”.

If you dare to play the Angus Young riff-influenced “In The Heat” while driving you WILL receive a speeding ticket — you’ve been warned. I fully recommend Full Pull, as this is hard rock at its finest.