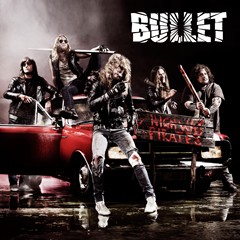 Review:
Its album number three from the Swedish rock/metal outfit Bullet — will we still be banging our heads? Well yes… of course, as if there were any doubts at all.

Highway Pirates is the same, and at the same time it’s not the same old either. This album is a natural progression from what started on Heading For The Top and then followed on Bite The Bullet. It’s more polished, the song arrangements are more complex, and there are some real serious numbers kicking on this CD. We have catchy riffs (as expected), songs that are clearly written for the anthemic audience sing along and some real radio friendly numbers — but it’s still delivered with the same pace, energy and drive that fans of Bullet have come to appreciate. It’s still AC/CD meets Accept meets Judas Priest and it’s still pounding drums from Gustav Hjorsjo, Adam Hector‘s driving base, Erik Almstrom and Hampus Klang delivering the twin guitar attack and Hell Hofer screaming his way along — tremendous stuff!

Let’s have a closer look at Highway Pirates then. The disc kicks off with the title track, a fabulous number that just rips right along — it is a fantastic way to start things off and it gets better each time you hear it. “Back On The Road”, as you’ll clearly hear, is an AC/DC inspired number, a nice little fist-clencher and head-nodder, and therefore it’s good as well. Third up is “Stay wild” which has a nice change of energy in its introduction before kicking into another head bashing, chorus belting and chest pounding blockbuster. The energy drops slightly on “Blood Run Hot” which is another good, though not great, number with a tight little solo. “Fire And Dynamite” follows and starts more slowly, building up to the attack nicely, and should be a good crowd pleaser.

“Down And Out” is more of the same with a catchy chorus for the crowd to sing along with but then the CD gets faster again with “Knuckleduster”, a cracking number to lift things along after the slight lull in the last few songs. “Heavy Metal Dynamite” starts off like any AC/DC classic you’ve ever heard, and again that’s not a bad thing, and from there it just gets better — this is certain to be a top number for the live audience, there is nothing bad about this song. “Citylights” follows suit with great energy, making for some head-bashing material. Last but not least is “Into The Night”, which more than any other song on Highway Pirates shows you how far Bullet have come along as both musicians and artists — both the arrangements and solo work are great, resulting in a tune where everything just clicks perfectly, making for an absolutely incredible track to finish up with.

What can I say? There has been a lot of good stuff already released this year, and lot more slated to come — however, Highway Pirates is your first essential purchase of 2011. Buy, beg, borrow or steal this one because you’ll still be playing it later this year… that’s guaranteed!