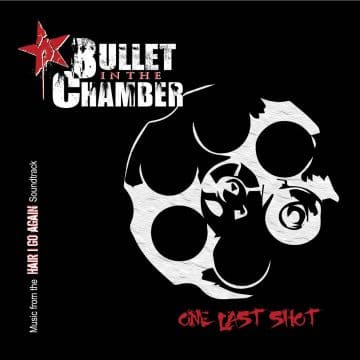 BULLET IN THE CHAMBER
ONE LAST SHOT
Released on April 25, 2017 (Elevision)

Review:
Quite a few months ago, I believe Kyle Kruger was kind enough to send a link to Sleaze Roxx to get a sneak preview of the movie Hair I Go Again. If I recall correctly, it was a time sensitive offer so I viewed the movie within a couple of days of receiving the link. To be honest, it wasn’t one straight viewing as I fell asleep a couple of times while watching the movie so I certainly can’t say that I was mesmerized by it. I think I was just more tired than anything else when I viewed it and plan on viewing it again in one shot in the future. That being said, to me, having two guys — Kruger and his buddy Steve McClure — resurrect their ’80s band and put everything on the line (including McClure‘s house that was eventually put up for sale) to make their band happen didn’t feel that compelling. The best parts of the movie were the star studded cameo appearances and commentary from rock stars such as “Metal Cowboy” Ron Keel during the improbable journey that Kruger and McClure went through. Come to think of it, Ron Keel did more than just a cameo as he helped the two would be rockers in a huge way during the recording process of their songs for the EP.

While the journey turned out into a reality styled “hit” movie, the most important part should be the music that Kruger and McClure came up with from their rock n’ roll odyssey journey. As it turns out, Bullet In The Chamber‘s One Last Shot only contains four songs. That’s not much of an output for an album that was arguably many years in the making but when you think about how far “behind” that Kruger and McClure were at during the beginning of Hair I Go Again — with McClure declaring not having played his guitar since 1986 — coming up with four good songs is a strong effort. I have to say that I was expecting Bullet In The Chamber‘s songs to sound more “hair metal’ than they are. In fact, I was expecting big guitar riffs, catchy choruses and perhaps even some real cheesy lyrics. Instead, Bullet In The Chamber deliver four slower to mid-tempo rockers that are highlighted by Kruger‘s distinctive delivery and some very good but not obvious melodies. Granted, the four tracks are slower paced than I would usually listen to but anytime I listen to the record, I almost always listen to it to the end — which says a lot in itself.

Bullet In The Chamber do have some heavyweights playing on their debut album, namely with Keel, Ron Keel Band and ex-Steeler frontman Ron Keel handling bass duties on the three studio tracks and former L.A. Guns guitarist Stacey Blades playing the solo on “Eyes On Fire.” What I like the best about Bullet In The Chamber‘s One Last Shot EP is that the duo of Kruger and McClure seem to have found their own sound. Why even great bands like Judas Priest, Great White and Sister Sin needed at least one album to find their actual sound but Bullet In The Chamber seem to have hit the nail on the head right away. My two favorite tracks on One Last Shot are “Gone Again” and “Your Crime” where I find myself quite often singing along to the clever melodies.

There are a few oddities on the EP. Although there are only four songs, one of them is a live rendition (“Hold My Head Down”). Perhaps it was included to show the guys “making it” as they got a band together to play a show. The biggest oddity is the commercial for the Hair I Go Again movie at the end which is not listed as a “track” but really should be. In any case, the commercial is cleverly done so if you can’t get excited about watching the Hair I Go Again movie after listening to the commercial, you don’t have much of a pulse. At the end of the day, One Last Shot is billed as the music for the Hair I Go Again soundtrack so it kind be that surprising that the EP would contain such a blatant plug for the movie.

Overall, Bullet In The Chamber‘s One Last Shot EP is a good album. It might not be what you expect from two guys who had a band back in the ’80s and who tried reforming it more than 25 years later — while in the process labelling their movie Hair I Go Again — but it’s an enjoyable album nonetheless.

Bullet In The Chamber‘s “Hold My Head Down” song (from the Hair I Go Again soundtrack):

Hair I Go Again: Inside the Music (DVD Extras Preview):