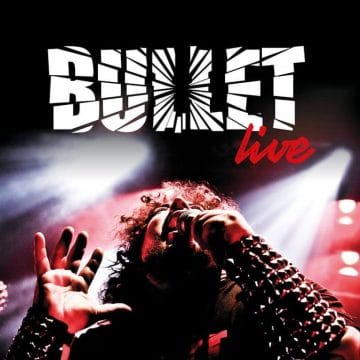 Review:
Swedish heavy metal rockers Bullet seem to be one of those bands that got recognized early on and even though they have kept putting out quality music, they have not gotten to that next level like some of their contemporaries. Bullet started strong — at least in Sleaze Roxx‘s eyes — as their sophomore full-length album Bite The Bullet finished at #1 on the Sleaze Roxx’s Top Ten Albums of 2008 and their third full-length album Highway Pirates snatched the #2 slot on the Sleaze Roxx’s Top Ten Albums of 2011. However, Bullet were unable to keep up that momentum going as their records Full Pull (2012) and Dust To Gold (2018) didn’t make it onto any Sleaze Roxx year end list. Bullet‘s Storm of Blades (2014) did finish at #7 on the Sleaze Roxx’s Top Ten Albums of 2014 but that was an odd “transition” period for Sleaze Roxx as that year end list was only released in July 2015 and compiled admittedly a little bit hastily. Interestingly, while Bullet did make an impression on Sleaze Roxx, it appears that the band has never really caught on with the Sleaze Roxx readers since none of Bullet‘s six full length albums have ever finished on the readers’ year end lists. Of course, getting an album on a Sleaze Roxx year end list is not the “be all, end all” but groups that continuously chart album after album such as Airbourne and Steel Panther are among the biggest when it comes to the “newer” bands.

In any case, Bullet have kept releasing similar type records, whether people like it or not. Bullet‘s debut live album, the aptly titled Live, seems to emphasize this given that there isn’t that much variety on the album. The band continues its Accept meets AC/DC music barrage with a lot of conviction. Funny enough, Bullet‘s Live could easily be mistaken for an Udo Dirkschneider era Accept live record as just like Dirkschneider, it is difficult to make out exactly what Bullet frontman Hell Hofer is “singing” amid the heavy metal music background. In fact, each time that I play Live, I am always enjoying it but don’t ask me to sing out any of the songs or even a melody from one of the tracks afterwards. Bullet‘s live album is a barrage of sound that is enjoyable but also quickly forgotten.

Bullet‘s discography is fairly well represented on Live with four songs from their debut Heading For The Top (2006), four from Bite The Bullet (2008), one from Highway Pirates (2011), one from Full Pull (2012), three from Storm of Blades (2014) and five from Dust To Gold (2018). I say “fairly” because material from Bullet‘s middle albums Highway Pirates and Full Pull seem to have been sacrificed in favour of the band’s newer material. It’s a bit of shame that Bullet didn’t release a live record a little sooner given that they have so much material from which to derive their live set.

If you like classic Accept styled heavy metal with some AC/DC sprinklings, odds are that you’ll really enjoy Bullet‘s debut live record. Bullet serve up straight up heavy metal rockers highlighted by Hofer‘s gruff vocal delivery. I’d love to get the chance to see them play live one day but have resigned myself to the fact that unless I head overseas and catch the band playing live somewhere in Europe, the chances of seeing Bullet live appear slim to none. I will have to settle for their live record Live, which shows that the band can really pack a punch when it comes to playing live.