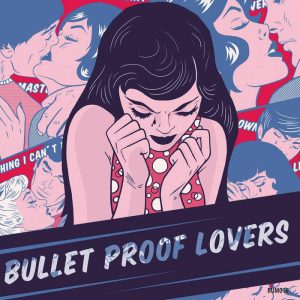 Review:
Some reviews are easy to write. You hear a few tracks and just know what you are going to say. Bullet Proof Lovers provide simple often catchy rock n’ roll that is easy to review. Sophistication is definitely not one word that I would use to describe Bullet Proof Lovers‘ music. It’s just straightforward rock n’ roll with lots of hooks and a bit of a punk edge to it. Kurt Baker‘s vocals aren’t the greatest but at the same time they are mostly listenable all the way through. Baker seems to know his limitations and does not really extend himself out of his comfort zone. However, listening to him muddle through the verses of “Breaking Down” is borderline annoying.

The best parts on Bullet Proof Lovers‘ self-titled album are when the vocals stop and you can hear the really catchy yet simple guitar riffs offered by guitarists Luivi Costa and Juan Irazu. Their guitar solos are nothing to write home about and are sometimes just underwhelming such as on a track like “Never Too Loud” but their guitar riffs and melodies on the aforementioned track and a song such as “Nothing I Can Do” are really good. With only two of the seven songs clocking over three minutes, you know what you’re getting with Bullet Proof Lovers — fast paced simple rock n’ roll. The best tracks are the catchiest ones — “It’ll Be Alright,” “Nothing I Can Do” and “Never Too Loud.”