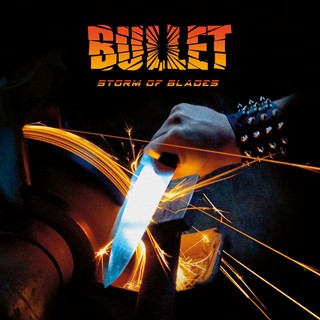 Review:
A throwback to early ’80s heavy metal, Bullet have returned with their fifth full-length album Storm Of Blades — and what an album it is! While enjoyable enough, the Swedish band’s previous two releases failed to capitalize on the strength of 2008’s Bite Down Hard — but all that has changed with Storm Of Blades. The foundation of AC/DC rock meets classic Accept era metal remains in place, but this album finds Bullet returning to their angry and raw roots.

Hell Hofer is undeniably a love ’em or hate ’em type of vocalist, a caricature in both look and sound that could have fronted the house band from the popular Muppets franchise. He’s almost hard to take seriously, but when he starts screaming, wailing and barking every metal fan with an ounce of integrity has to stand up and take notice. He ‘sings’ with such fury that when he hits the title track’s breakneck chorus of, “Heavy metal, you will watch your heart rise,” you better believe the hairs on your body will rise as well. The crystal clear guitar riff of “Riding High” propels the song into the stratosphere and then the band takes an AC/DC inspired turn during “Tornado”. “This One’s For You” is another stand-out track, on an album overflowing with them, as it stutters prior to a chorus that simply screams anthem.

The addition of guitarist Alexander Lyrbo has obviously given Bullet a shot of adrenaline, and teaming up with longtime member Hampus Klang creates a pairing that could rival Judas Priest in their prime. Perfect examples of this are the chugging “Hammer Down” and “Run With The Hunted”, a song that finds the tandem showing off their prowess at criminal speeds. There isn’t a ballad to be found on Storm Of Blades, in fact you won’t even find a track that slows down the pace even slightly — the entire album is fist-in-the-air head-banging metal complete with a heavy beat and gang vocals that gives it an old-school feel.

Storm Of Blades is heavy metal at its best, a relentless return to form for Bullet and the logical follow-up to Bite The Bullet. Many groups claim to return to their roots, only to miss the mark by a long shot — but not Bullet, who have driven a spike right through the bullseye with this release. You’ll be hard pressed to find a band in this day and age that plays with such conviction and power because Bullet storm through this album like their future (and even their lives) depended upon its success.