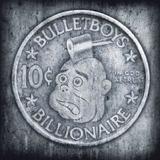 Review:
There was a time when I loved the BulletBoys, but those days seem like an eternity ago. Long gone are the days of playing “Shot The Preacher Down” to the religious kids or making them squirm to “Kissin’ Kitty”. That was twenty years ago and BulletBoys are no longer the same beast.

After hearing “Road To Nowhere”, which as the title suggests goes absolutely nowhere, my expectations were pretty low for 10c Billionaire. It was probably those low expectations that prevented me from vomiting when first spinning this disc. As it turns out there were a few moments that caught my attention, but for the most part this CD comes across as the BulletBoys trying too hard to be something they’re not. They’re a sleazy hard rock band, or at least they used to be, not something that should be trying to worm its way into the current mainstream.

The biggest disappointment for me is that Marq Torien still has the voice, he could still pull off the sleaze sound of decades past yet seems unwilling to. There were a couple songs that I enjoyed, such as “Blessed By Your Touch” and “Born To Breed”. The first has a pretty catchy chorus and the later showcases some cool guitar work. After those two songs though things go downhill quickly, and apart from “Wasted”, everything becomes fairly forgettable. And there is no reason on God’s green Earth we needed two versions of “Road To Nowhere”. On the bright side however, at least we didn’t get two versions of the horrendous “Witness”!

I’ll tell you what the difference is between the BulletBoys of 1988 and the BulletBoys of today. In 1988 the band released a song called “Kissin’ Kitty” that could get any heterosexual male excited, today they release a song called “Girls Kissin’ Girls” and it just makes a guy limp. I’m not ready to give up on Marq Torien just yet, but he’s also making it harder and harder to get excited about the BulletBoys. You’re going to need a pretty open mind to get into 10c Billionaire, something I don’t have.