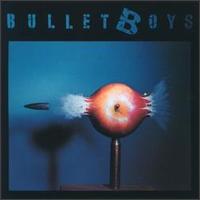 Review:
The debut release from the BulletBoys is hard rocking effort, often drawing comparisons to early Van Halen. Songs like “Hard As A Rock”, “F#9”, and the incredible “Kissin’ Kitty” really rock! “Smooth Up In Ya” and “For The Love Of Money” were minor hits for the band, both placing within the top 80, while the album itself pushed into the top 40.

Singer Marq Torien was compared to David Lee Roth in both ability and attitude, while he and Mick Sweda and Lonnie Vencent were all members in King Kobra. The music here is comparable to a raw Danger Danger and the previously mentioned Van Halen. Marq Torien still records as the BulletBoys, but they were never able to recapture the success of this debut. In the meantime this album gets two thumbs up – it is a classic!