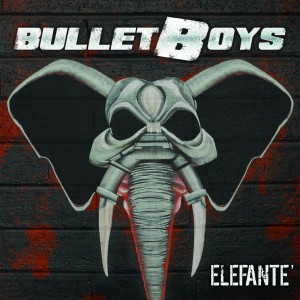 Review:
There are some albums by some bands that I approach with reservations upfront. That may be to the fact that a band I once really dug is now putting out shit, or even worse, a record full of decently written songs, dressed in a horrible new rock sound. Imagine — you get a group of decent musicians, who used to release some great music in the past, and ever since they came back, they try really hard to prove that they are everything else than what they were in their heyday.

Sometimes it works, but in case of the so called big hair bands of the 80s/early 90s, this is rarely the case. And that is even when all that is left of the original squad is a frontman as is in the case of BulletBoys, which is by now basically a Marq Torien solo act. The original BulletBoys had two great albums back in 1988 and 1991. After that, they got a bit lost with their third effort, and then, when grunge kicked in, and all of the hard rock scene came crashing down, so did the BulletBoys. Now, the band has slimmed down more or less to the aforementioned Torien on lead vocals (and songwriting) with a bunch of revolving door musicians.

Ever since returning to the scene, Torien, who is a really monster of a vocalist in my opinion, has been trying to reinvent himself and his band’s sound so that it has as little to do with the BulletBoys‘ hay day as possible. His last efforts, were either live/cover CDs, or about two albums of new music, which were slammed by a lot of fans, mainly due to the fact that it sounded like Torien wanted to fit in the new genres of rock as much as he could, and he got lost in it in the process. That was the case with the 2009 release 10 Cent Billionaire, which to me seemed very strained and inconsistent. The sound reminded me a cross between a hard rock record and California punk at times, but with no flare or any punch. The sad thing is there were some decent hooks on that record and Torien sounded great. However, all this got lost in disappointing production and the less than average sound.

This year however, Torien returns with the album Elefante’, written mainly by him. Despite that Torien is backed by a completely new band, the name BulletBoys still stands. In any case, let’s give this one a chance. The first thing that hits the listener is that Elefante’ seems much more hard rock oriented than its predecessor, which to me is a major positive. Apart from that, the songs also seem just better written. On the last BulletBoys album, I had a feeling that all the songs kind of blended in a blur. This time, each one stands out for itself really. Sure, there are weaker moments like the more mellow “Kin Folk” or “As Dumb As” but overall, all of the songs are well written lyrics wise, and the music sounds sharp and even a bit aggressive during  certain numbers. Tracks like “Drop Your Weapon”, “Tsunami” and “Superhuman Girl” are really edgy. The first song “Symphony”, which was released almost a year before the album came out, is a very catchy power ballad mixed with some stronger moments and should be found very adaptable to being played by rock radio stations. “Rollover”, which is the first single, is also a cool tune — darker and more aggressive while also very catchy.

All in all, I am happy for the BulletBoys or Torien — whichever way that you want to describe this act. However, this release is still far removed from the original band’s releases — mainly in sound and style — as it is a gathering of well written and catchy, if not a bit overproduced songs. One thing is a constant here, and to be honest always was in the case of BulletBoys‘ albums, and that is Torien’s vocal delivery. Not only does Torien hit high notes with ease, his voice is really like nothing else I have heard ever. The key is originality. It is the same case as with Jani Lane or Joe Leste. There may be some technically superior voices, more trained and so on, but Torien’s manner is unique. His voice is soulful, raspy, strong and, especially on Elefante’, you can hear him belt out some insane screams. Let’s put it this way, if there are some unreleased demos floating online, you can easily decipher if Torien is handling vocals on it. His voice is unmistakable.

Torien‘s terrific vocal delivery together with good, strongly written songs, produced in a finally more rock oriented manner, all make for a good album. Elefante’ is worth a listen and I encourage you to get it. I always like when I have reservations about an album at first and then it surprises me in a good way — and that is the case with Elefante’.